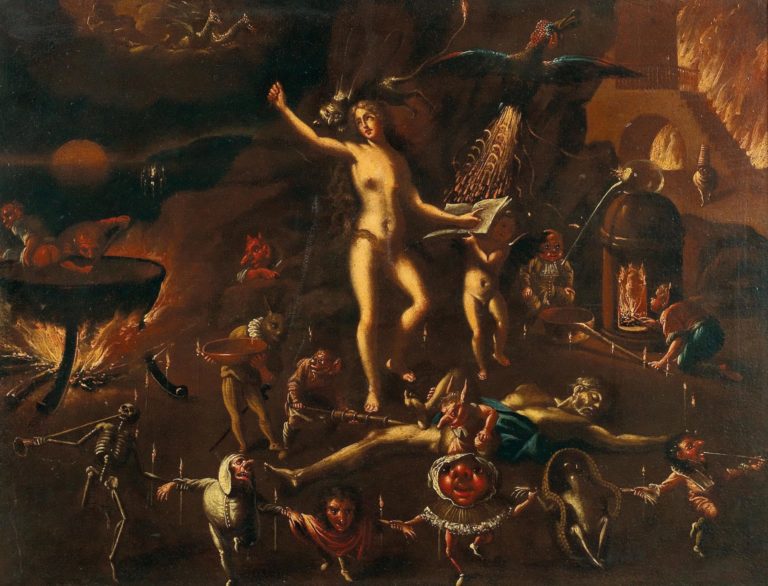 We are grateful to Bernard Aikema for confirming the attribution after examination of the present painting in the original.

The present work is a typical painting by the Augsburg born painter Joseph Heintz II, who spent his career in Venice, where he died in 1678, at the age of about 78. The son of Emperor Rudolf II’s court painter, called Joseph as well, Joseph II specialised in two innovative genres: view painting and scenes of witchcraft, monstrous creatures and magic, vaguely in the manner of the Netherlandish painter Hieronymus Bosch. The present picture is a perfect example of the latter category.

The scene is dominated by the standing figure of an almost nude woman, who seems to be reciting from a sheet of paper held by a putto; a large peacock flutters up on her left. Below the woman, a man is lying on his back and in front of him, and facing us, is a picturesque line of dancing “infernal” little monsters. Other sinister scenes are visible towards the rear; a fire is raging in the upper right corner.
The exact meaning of the scene escapes us, but there is certainly a blasphemous undertone: in fact, the man lying on the ground strongly reminds us of Christ crucified. Such irreverent images were not rare in Venice around the mid-seventeenth century. In fact, Heintz must have been in contact with libertine circles in the city, such as the famous Accademia degli Incogniti, headed by the patrician Giovan Francesco Loredano, where blasphemous and even atheistic ideas were propagated in literature and in images by artists such as Pietro della Vecchia and, indeed, Joseph Heintz.
As for the visual sources of Heintz’s bizarre figures, one has to think primarily of printed material, such as the engravings after Bosch by Pieter Brueghel, or those by Giorgio Ghisi and Jacques Callot. Paintings by Heintz are difficult to date, but the present work appears to have been done in the artist’s mature period, somewhere around the mid-seventeenth century.