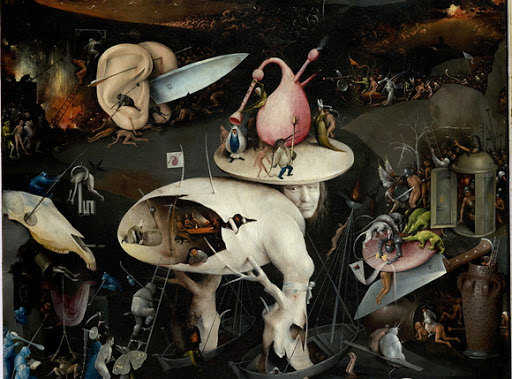 The author argues that the Tree-Man in the right interior panel of Bosch’s Garden of Delights triptych represents Eternal Death or la muerte del alma que trae el pecado (the death of the soul caused by sin). Her arguments are these:

These arguments do not sound very convincing. In my opinion, the ‘body’ of the Tree-Man does not look like a male torso at all. And since 2016, thanks to the archival research done by Lucas van Dijck, we know that the ‘M’ on the knife is the logo of a ’s-Hertogenbosch producer of knives. If you want to reach a correct understanding of the Tree-Man, should you not also explain why there is tavern scene inside the ‘body’, why there is a signboard showing a bagpipe, and why a tabletop is balancing on the Tree-Man’s head, with sinners and devils walking around a giant bagpipe? The author does not even mention these details. Neither is there a reference to the ‘Vision of Tondal’, a text that probably inspired Bosch when he painted his Tree-Man.