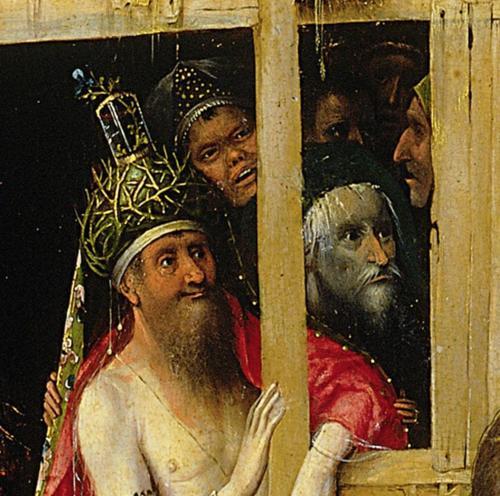 Aragonés Estella does not agree with Brand Philip’s interpretation of the so-called ‘Fourth King’ in Bosch’s Epiphany (Madrid, Prado) as the Antichrist (see Brand Philip 1953). In her opinion, this figure is a Jew representing the Jewish people that do not recognize the divinity of Christ. Before Bosch, such a figure was also painted within a similar Epiphany context by other artists. Aragonés Estella refers to:

The medieval legend of the Red Jews was quite well-known in the fifteenth century. They were supposed to be the peoples Gog and Magog, which were locked up inside a mountain by Alexander the Great, only to be freed at the End of Times by the Antichrist in order to create chaos in the world.

Apart from the red colour, Aragonés Estella offers no additional arguments to convince the reader of her interpretation of Bosch’s ‘Fourth King’ as a Red Jew. This is particularly true regarding the further details of Bosch’s figure. In fact, the second part of her article, dealing with the figure of the ‘fool’, with Jews (partially) clad in red in other works by Bosch and in paintings by other artists, and with the links between the Low Countries and Spain, makes a rather incoherent impression. On the other hand, by relating Bosch’s ‘Fourth King’ to Jewish figures in Epiphany paintings by earlier artists, the author does seem to have a point. Could it be that Bosch, as he did so often, based his ‘Fourth King’ on a well-known pictorial topos, at the same time adapting it according to his own needs? Furthermore, it is clear that whoever wants to interpret Bosch’s ‘Fourth King’ will have to account for the unusual red (sun-burnt?) colour of his face and neck. (Personally, I do not see the man’s beard as reddish, only his face and neck.)