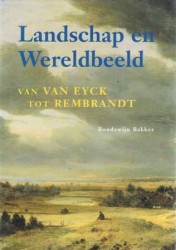 Chapter 7 [pp. 136-169] of the commercial edition of Dutch art historian Boudewijn Bakker’s dissertation deals with the landscapes in the paintings of Jheronimus Bosch, Joachim Patinir, Quinten Massijs and Gerard David. Its conclusion is: the first quarter of the sixteenth century should not be considered as a period in which painted landscapes are losing their didactic content, but on the contrary as the prime of allegorical landscapes in early Netherlandish painting. In other words: shortly after 1500 the painted landscape was still conveying spiritual and allegorical messages, although it remains a debatable question to which degree this was also true for the many replicas and adaptations in these painters’ workshops and for the works of their numerous imitators [p. 169].

As for the art of Bosch, Bakker analyses the landscapes in the Haywain, in the Vienna Last Judgment and in the Garden of Delights, concluding that Bosch’s landscapes are an integral and meaningful part of his painted sermons and thus agree with the religious function as altarpieces and devotional paintings his triptychs and single panels had (‘as is generally accepted by experts today’) [pp. 136-144]. But as compared to other (earlier and contemporary) painters Bosch is definitely a special case. Whereas with those other painters landscapes are primarily intended to demonstrate the sheer beauty of the Creator through the beauty of His creation, Bosch presents the visible world in a negative way associating it with vanity and false appearances.

According to Bakker the three analysed triptychs follow a similar pessimistic concept in which two characteristics are pivotal: on the one hand the history of the world from beginning to end is shown within one enormous geographical space (a ‘world landscape’), on the other hand history is a process in which the world from beginning to end is totally controlled by sin and punishment, leaving no room for reconciliation and salvation. Only the Vienna Last Judgment offers an example of comfort: the two saints in the exterior panels. In the art of Bosch salvationism has turned into doom-mongering. The history of mankind and the world is completely under the spell of evil and those individuals who try to resist (see Bosch’s saints) are continuously suffering from threats and temptations, against which only Christ’s support can help.

Within this iconography landscapes play a pivotal role: ‘Sometimes “normal” nature is overgrown with bastard creations usually carrying strong erotic and aggressive undertones. In other places Bosch paints a wonderfully varied, in its almost seizable “Dutchness” recognizable landscape apparently intended to be universal, in which unexpected signs of doom emerge: fires, shipwrecks, Turkish flags, gallows and poles, monkeys and pigs and people engaged in all sorts of vices’ [pp. 142-143]. This concept and particularly the three central themes of Bosch’s art (the dangerous attractiveness of the world, the sins of mankind and the divine predestination of sin and punishment) can also be found with a number of earlier and contemporary writers: ‘Several sources show that many of Bosch’s contemporaries felt that they were living in times of spiritual crisis. The order that God had intended was being disturbed everywhere. Many expected the end of times and the dreaded Last Judgment to arrive soon’ [p. 143].

One can readily agree with Bakker’s theses that Bosch’s landscapes are important and meaningful parts of his message and that these landscapes are overgrown with evil. But somehow Bakker seems to exaggerate Bosch’s pessimism by minimalising the positive aspects of his message: he underestimates the role played by Christ and the saints in the art of Bosch, he does not point out the presence of saved souls in the central panel of the Vienna Last Judgment and the pedlar in the exterior panels of the Haywain is called ‘a not very hopeful alternative’ and ‘a lonely wayfarer in a world filled with robbery and lust’ [p. 139], whereas one page further we read: ‘In the case of the anonymous wayfarer in the Haywain’s exterior panels this remains unclear [namely whether he represents an element of hope and comfort, edb]: is he the wandering Prodigal Son or a pious and tormented Christian pilgrim in an evil world?’ [p. 140]. It may be reiterated here once more: in the exterior panels of his triptychs Bosch always shows the good example. Generally speaking, Bakker does not seem to be very familiar with the secondary literature on Bosch. In this respect, his endnote 283 [p. 408] can only be called disappointing. Because this book is not a monograph on Bosch, this is to some degree understandable, but all the same not less risky when it comes down to phrasing generalising conclusions.