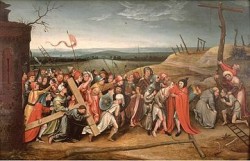 In 1917 Baldass signalled a Carrying of the Cross (Weinberger Collection) which he considered to be a faithful copy of a late Bosch work. A few years later the original surfaced on the art market and in 1923 it was acquired by the Gemäldegalerie in Vienna. It now became clear that the copy was not based on a late but on an early work by Bosch: Baldass dates the Vienna Carrying of the Cross around 1480. In the rest of his article Baldass compares the original with the copy.