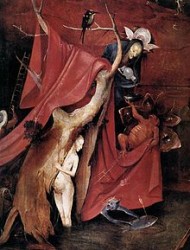 No doubt this monograph written by professor Bax (his doctoral dissertation, defended at the Katholieke Universiteit Nijmegen in January 1949) is a standard work of reference. Bax’ approach of Bosch can be called ‘cultural-historical’: in order to understand the painter it is necessary to undertake a profound study of the language, the literature, the folklore and in fact the complete cultural history of the Netherlands and also of the broad area of Western European art, all this for the period from about 1300 till about 1600. Furthermore attention must also be paid to certain relevant aspects of German and French literature and folklore.

This may seem quite a heavy task but in his writings Bax himself constantly shows that he is widely-read in an amazing way, possessing an almost encyclopedic knowledge of his subject matter. His most important trouvaille has been that he saw Bosch as a kind of ‘painting rhetorician’ (rederijker). In their literary work the fifteenth- and sixteenth-century rhetoricians showed a clear preference for puzzles, rebuses and other linguistic games. According to Bax Bosch was doing the same thing, the difference being that he did not use words but images to refer to (other) words. This boils down to the fact that Bosch’s paintings can often (not always!) be split up in little parts and details and that each of these parts can be linked to a linguistic, folkloristic or other (more general) cultural reference.

With Bax this method often leads to revealing observations. For example, the fact that the protagonist of the Rotterdam Pedlar tondo is wearing a shoe and a slipper at his feet refers to the old Dutch saying ‘to walk on a shoe and a slipper’ (op een schoen en een slof lopen), meaning that someone is a poor, shabby person. Actually, this example is somewhat unfortunate, because this association had already been made by others before Bax. But Bax’ originality lies in the fact that he sees similar references in virtually évery detail, although now and again this leads to some intellectual acrobatics in order to desperately sustain a method that has proven to be fruitful in so many other instances. A good example of this are Bax’ considerations regarding the ray functioning as the flag of a ‘duck-ship’ in the bottom right corner of the central panel of the St. Anthony triptych (Lisbon).

In the first part of his monograph Bax offers a detailed analysis of this latter triptych and concludes that its symbolism is based on the Middle Dutch language, on certain customs and traditions and on the more profane visual arts of the late Middle Ages. In the second part Bax discusses the symbolism of a number of objects (funnel, kitchen utensils…), animals (owl, fish…) and persons (beggars, celebrators of Carnival…) that often show up in Bosch’s paintings. In many cases these motifs have something to do with Carnival or with other forms of merrymaking, which is why Bax concludes that Bosch abhorred these things and associated them with diabolic connotations. Bax also briefly analyses a number of smaller Bosch paintings (no triptychs, though) and the last chapter offers a concise overview of all the influences from literature, the visual arts, drama, folklore etc. that have been ascribed to Bosch, to which Bax adds his own insights.

In the end Bax draws some summarizing conclusions. According to him Bosch was a moralist and satirist with a strong inclination to the bizarre (see the eroticism and the cruelties in his works, although they are dealt with in a cerebral and symbolical manner). All layers of society, from pope and emperor to prelate and beggar, are taken to task by Bosch, but in most cases he is aiming at people from the lower classes who are leading a sinful life. Bosch’s message seems to be: every sin is a form of folly and the worst vices are debauchery and licentiousness.

Bax also attempts to sketch Bosch’s psychological portrait. According to him Bosch was an intelligent, energetic man with the dark view of a preacher. But he was not a total pessimist: salvation is still possible because Bosch also painted Heaven, his saints are capable of withstanding the devil and his landscapes are often strikingly pure. Then again, his being inclined to the bizarre pushed him towards Hell and devil rather than to Heaven and angel. Bax also points out the important iconographical innovations that Bosch introduced and he signals that Bosch’s criticism on the Church does not prove that he was a heretic. In an appendix he reviews Wilhelm Fraenger’s Das Tausendjährige Reich (see Fraenger 1947) in a very critical way.

This monograph does not make easy and smooth reading. But the book contains so many revealing observations and so much interesting material for study that it is bound to be called an indispensable apparatus for the research on Bosch. Whoever wants to study Bosch in a serious way, has to read Bax sooner or later. Too bad that due to the linguistic gap his texts and ideas have only been getting international approval since the nineteen-seventies, not in the least thanks to the English translation of this 1948 publication.