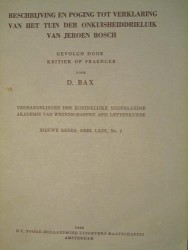 Bax offers a detailed description of The Garden of Earthly Delights and also ventures to deliver an interpretation, again using his cultural-historical method: his sources are the language, literature, pictorial arts and folklore of the fifteenth- and sixteenth-century Netherlands. He also refers to a number of influences that Bosch may have undergone when he designed his triptych and offers new details about a number of other paintings and drawings of the master from ’s-Hertogenbosch.

In the exterior panels Bosch painted the morning at the end of the third day of creation. In the corresponding Biblical text (Genesis 1: 9-13) the earth’s fertility is being emphasized, which is why Bosch painted a number of sexual symbols (spiny, conical and spherical plants).

With the representation of God, Adam and Eve in the left interior panel Bosch wanted to refer to Genesis 1: 28: ‘And God blessed them and said: grow and multiply’. This explains the sexual symbolism that can also be detected in the landscape of this panel. The numerous animals refer to the words of God following the passage quoted above: ‘Rule the fishes of the sea and the birds of the sky and all animals that move across the earth’.

According to Bax Noach, Adam and Eve have been depicted in the lower right corner of the central panel. This panel abounds with sexual symbolism, but this time in a negative context. Bosch wanted to point out that sexual intercourse, as introduced by God in Eden, was a good thing. But Adam and Eve have generated a stock that abuses sex to satisfy its own lust. Eve (who brought evil into the world with the original sin) is the cause of this which is why Adam and Noach (humanity’s progenitors, Adam after the Creation and Noach after the Flood) are pointing an accusing finger at her. This evolution in time is parallelled by the compositional link between the left interior panel and the central panel. Bax underlines the fact that Bosch did not represent the sin of unchastity in a sensual, but in an esthetical-symbolical way, lest the spectator’s feelings would be hurt.

In the right interior panel we see the punishments of hell for luxurious humanity. Although other sins than Luxuria are also being punished, they are almost always associated with unchastity in one way or another. The upper part of the hell panel represents purgatory.

Bax is of the opinion that Bosch painted the triptych for an important worldly or clerical patron who knew Dutch and who did not use the painting as an altarpiece in a chapel but as a decoration piece inside the house.

In an extensive epilogue Bax offers a very critical analysis of the writings of Wilhelm Fraenger. He concludes that the German is a ‘fantast’ and that art historians who don’t speak Dutch and yet occupy themselves with Dutch or Flemish art, should be able to read and understand Middle Dutch literature in the original version. According to Bax this is necessary in order to place Bosch’s paintings in their correct socio-cultural context.