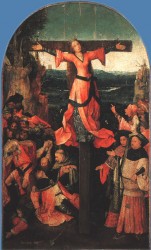 Bax focuses on the so-called St. Julia triptych (Venice, Doge’s Palace). Most authors identify the crucified female martyr in the central panel as St. Julia. A few authors identify her as St. Wilgefortis who is also called St. Ontcommer. Bax analyses the two hypotheses and concludes that the St. Julia interpretation is the most acceptable one.

The representation of St. Anthony in the left interior panel can be linked to a passage in the Vaderboek, but Bosch’s devils carry meanings they don’t have in this text. The right interior panel causes more trouble to Bax. He is unable to identify the friendly hermit who shows the way to a soldier. The backgrounds of the wings (a burning city and a harbour with shipwrecks) can be interpreted in different ways, depending on whether the crucified protagonist is identified as St. Julia or as St. Wilgefortis. The triptych, which is in a very bad condition and whose wings have been overpainted at the bottom (allegedly by Bosch himself) are believed to date from around 1500.