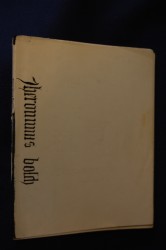 Bax points out that Bosch was often inspired by the Dutch language and literature: ‘I believe that Jheronimus and his school sometimes represented proverbs, sayings and puns and that sometimes their symbolism was inspired by their language. Nevertheless, in order to achieve a general interpretation of their works, not only the Dutch language should be studied, but also the literature, iconography, folk-lore and cultural and religious history of the Low Countries, and sometimes also of regions outside the Netherlands’ [p. 61]. In this contribution Bax does not introduce new material but refers to insights from his earlier publications. The fact that Bosch was interested in his language agrees with a tradition in the Netherlands that already existed long before him [p. 71].