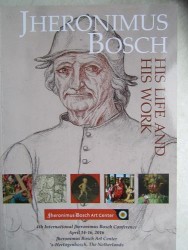 Because the landscape in the right interior panel shows architectural and artificial motifs it should be seen as an apocalyptic vision of hell on earth rather than as a representation of hell in a strict sense. The triptych as a whole presents a pessimistic history of man, ranging from the Creation of the World in the closed wings and the Creation and Fall of Man in the left and central inner panels to the right interior panel showing the consequences of the Fall in the form of an allegory of the grim state of society at Bosch’s own time. The Garden seems not to have served purposes traditionally associated with religious painting despite its (partly) Biblical subject matter and its triptych format, but was more likely intended to stimulate reflections upon the nature, history, and fate of mankind.

After all this, a good question would be: if the central panel is set in Eden and depicts the Fall of Man, where do the black men and women come from?