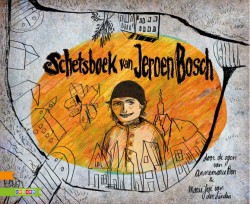 A childrens’ book for 10- to 12-year-olds. The texts (written by Annemarie Bon) are supposed to represent the diary of the 13-year-old Bosch and are accompanied by a lot of drawings (made by Marie José van der Linden) that have sometimes (but certainly not always) been inspired by Bosch’s paintings and drawings. They are mainly about the urban environment of the young Bosch and about his desire to become a painter. In separate boxes the young reader is offered some facts adapted to his age. Everything is presented in a light-hearted and witty mood but some things have to be taken with a pinch of salt. For example, when on page 54 Bosch’s ‘secret language’ is being dealt with, the caption to a drawing of a rooster reads: ‘Someone who wants sex’. And a drawing of a bird is accompanied by the caption: ‘A whore’.