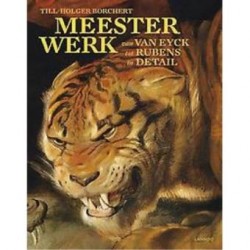 In this king-size publication with its beautiful illustrations Till-Holger Borchert, chief curator of the Musea Brugge (Museums Bruges), analyses and shows a number of paintings produced by 21 Flemish painters (from Van Eyck to Rubens), focusing on some selected details from these paintings. One of the chapters [pp. 246-289] is dedicated to Bosch. After a short introduction about the life of Bosch three Bosch triptychs (all of them: Prado, Madrid) are dealt with: The Adoration of the Magi, The Garden of Delights and The Haywain.

The short survey of Bosch’s life has some questionable statements: things that could be true but that are presented here as standing facts. Bosch’s family is said to have come from Aachen (Aix-la-Chapelle). The house of Bosch’s father Anthonis van Aken is said to have fallen prey to the great fire of 1463 after which Anthonis himself rebuilt it. Bosch and his wife are said to have sold some properties in order to finance the design of a workshop. After Bosch’s death his nephews are claimed to have been successful with imitations of his inventions. On the other hand, that Bosch witnessed the great fire of 1463 as a child is called ‘likely’. That Bosch painted a Last Judgment and a St Anthony triptych for Philip the Fair in 1504 is only true as far as the Last Judgment is concerned. That Bosch painted the St John on Patmos panel (Berlin) and the St John the Baptist panel (Madrid) for the altarpiece of the Confraternity of Our Lady is also presented as a standing fact, whereas it actually still is a (strongly debated) hypothesis.

The section about the Adoration of the Magi triptych correctly points out that its patrons were Peeter Scheyfve and Agnes de Gramme and that the three troops of soldiers in the background of the central panel are probably the entourages of the Magi. The strange so-called Fourth King is interpreted (agreeing with Brand Philip 1953) as the jewish Messiah, ‘in Christian terms’ the Antichrist [p. 248]. On page 251 we read the same statement, but now suddenly with a question mark. Quite remarkable is that the author identifies the Joseph figure in the left interior panel (the man who is drying dipers near a fire) as a false monk, whereas one of the shepherds in the central panel (to the right) is identified as Joseph.

The central panel of the Garden of Delights has explicit allusions to sexuality everywhere but this is a false paradise, as can be derived from the right interior panel (a Hell). Christian doctrine teaches: no damnation without sin. In the left interior panel Bosch focuses on the marriage of Adam and Eve. Agreeing with Falkenburg 2011, Borchert claims that it is worthwhile to pay attention to the allusions to Burgundian court culture and festivities that Bosch integrated in the Garden.

Agreeing with Koreny 2012 Borchert attributes the Haywain to a left-handed, very talented pupil of Bosch. Remarkable: the bearded figure with the white turban to the left of the haywain is identified by Borchert as the Antichrist (although De Bruyn 2001a is not mentioned in the bibliography). The nun in the central panel (lower right) is said to hand over a sausage and a handful of branches to a bagpipe player. Actually, the handful of branches is a bundle of hay and the nun does not give a sausage, but receives it. Probably the translators are to be blamed for this error, because the English version [compare Borchert 2016b: 34] is correct: ‘A bagpipe player is making music while a young nun slips him some hay’.

Once again: the full-page illustrations are wonderful!