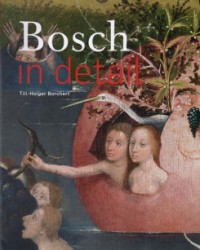 The big plus of this publication are the large illustrations of details from the oeuvre of Hieronymus Bosch, offering the reader the opportunity to scrutinise some parts of the paintings closer and longer than would be possible in a museum or at an exhibition. If the book is purchased, the reader will also gain access to a digital version of some of the photographs through a personal code. The comments were written by Till-Holger Borchert, chief curator of the Musea Brugge [Bruges Museums]. In the introduction he announces that this publication does not pretend to be a scholarly monograph on the artist.

The book has three parts: a biography of Bosch, a short survey of his works and – by far the largest part – details from his paintings and drawings, classified by theme. These themes are: landscapes, architecture, faces, grisailles, heaven & hell, music & noise, monsters & mythical beasts, and the four elements. It could be remarked that in spite of this structure the way in which the details are presented is rather arbitrary.

In the biography [pp. 9-11] the author sometimes shows a singular imagination. We read that the house of Bosch’s father was destroyed by the great fire of 1463 and that afterwards the house was rebuilt by this same father himself. We also read that after Bosch passed away the family workshop was led by one of the painter’s nephews. Both claims are based on nothing. We are also informed that in contemporary documents the painter was called ‘Jheroen’ or ‘Joen’. The archives do mention ‘Joen’ en ‘Jeroen’, but never ‘Jheroen’. Grandfather Jan van Aken is said to have moved from Nijmegen to ’s-Hertogenbosch ‘in 1426’, as if that is a standing fact. Van Dijck 2001a: 15, gives ‘short before 1427’. We further read that Bosch died from the plague (Bosch possibly died from pleurisy, compare Van Dijck 2001a: 49). That the Berlin St John on Patmos panel and the Madrid St John the Baptist panel were painted for the altarpiece of the Confraternity of Our Lady, is not introduced as an hypothesis (which it still is) but as a certainty (the same on pages 16-17).

In the survey of Bosch paintings [pp. 13-41] the author sometimes, but not always, follows the insights of the Bosch Research and Conservation Project. The most conspicuous examples of this are when the Ghent Carrying of the Cross (p. 35) is dated circa 1520 and attributed to a follower of Bosch and when the Prado Tabletop (p. 40) is attributed to Bosch’s workshop or to a follower. But the Bruges Last Judgment (pp. 30-31) is said to have been painted by Bosch ànd his workshop (which is more careful than the BRCP) whereas the Vienna Carrying of the Cross wing (p. 23) is situated circa 1500-1505 (which is less careful than the BRCP, which dates ‘circa 1490-150’). This part also has some inaccuracies. It is not true that the Lisbon St Anthony triptych is the only original Bosch painting from which Bruegel borrowed certain motifs for his engravings (p. 28): Bruegel also borrowed motifs from the Garden of Delights. When the author writes about the Prado Cutting of the Stone he claims that Lubbert Das was a fictitious jester figure from late medieval Dutch texts (p. 34). This claim is based on nothing.

When commenting the numerous details from Bosch paintings and drawings [pp. 42-315] the author regularly provides information that may be interesting for the general reader, often regarding the painter’s style and technique. Some examples of this.

Unfortunately this part also has quite a number of passages that are inaccurate or questionable. Some examples.

Even though this is not a ‘scholarly monograph’ on Bosch, the list of more or less unfortunate passages is quite long. But it still is a book with very nice illustrations.