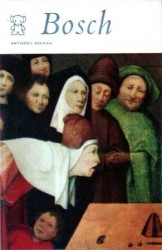 Every approach of Bosch should be based on his work and on the time in which this work was created. Bosch’s paintings are intended – as was expected from àll art in those days – to glorify belief: Bosch was a Christian moralist. His time was a time of insecurity and transition and the anxiety accompanying this was painted by Bosch.

Bosch’s iconography is not as deviating as some authors have claimed. Time and again the painter presents himself as a pious medieval man whose views don’t deviate from what was common. Also his style and painting technique ensue from the early fifteenth century. Bosman emphasizes the link between Bosch and miniature painting, a link that is threefold: there are compositional similarities, there is the influence of the phantastic little creatures and Bosch’s paintings fit in with the style of moralizing genre paintings into which the miniatures had evolved. Bosch can be seen as the first Dutch genre painter on panel.

In his analysis of separate works Bosman deviates only once from the traditional views in the literature about Bosch: with Fraenger he cannot agree with the common interpetation of the central panel of the Garden of Delights as a depiction of unchastity that leads to Hell. According to Bosman the panel breathes an atmosphere of peace and innocence and everything looks paradisiacal.