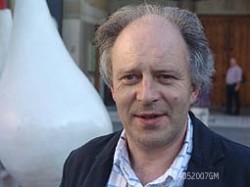 This magazine article announces the Bosch Exhibition in Rotterdam (fall 2001) and is based on an interview with curator Jos Koldeweij. One of the objectives of the exhibition is to present the most recent research on Bosch who is situated in the transitional phase between Middle Ages and Renaissance. According to Koldeweij Bosch, strongly influenced by the Modern Devotion, was a moralist and apart from profane and popular metaphors his work is characterized by a well-developed religious symbolism. It is almost sure that Bosch worked in a family workshop but documents proving this are lacking. We know very little about his biography and absolute certainties about his works are also rare. None of the 25 works considered original can be dated and recent dendrochronological research has shown that the Escorial Crowning with Thorns can’t be authentic because the tree delivering the wood for panel had not been cut during Bosch’s life.

Koldeweij also signals two pitches of the exhibition. The Berlin St John on Patmos and the Madrid John the Baptist are said to have been painted for the altarpiece of the Brotherhood of Our Lady in 1489/90. And the Rotterdam Pedlar tondo is suggested to have formed the wings of a triptych together with the Paris Ship of Fools, the Washington Death of a Miser and the New Haven Allegory of Gluttony. The central panel of the triptych has been lost.

Jan Braet’s article is a sound introduction to the exhibition, aiming at a wide readers public. Two small errors: Dirk Bax is spelled ‘Dirk Backx’ and the sculptor of the altarpiece of the Brotherhood of Our Lady was not Adriaan van Heeswijk but Adriaen van Wesel.