The Medieval Art of Love - Objects and Subjects of Desire 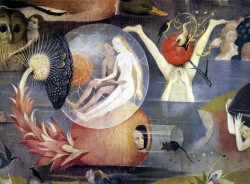 The Medieval Art of Love. Objects and Subjects of Desire (Michael Camille) 1998

In this book, intended for a general reading public, Michael Camille (University of Chicago) discusses a number of medieval motifs related to love and sex by means of depictions and objects belonging to the period 1200-1500. One of the things the author wants to lay emphasis on is that on all levels (from religion to politics) the religious and the profane world in this period overlapped, used the same language, treated the same subjects and even the same visual codes [p. 22].

Camille can’t be blamed for being prudish because whenever necessary he calls a spade a spade but more than once what he writes is in need of a few question marks. This is definitely the case when in the epilogue of his book he briefly focuses on Bosch’s Garden of Delights triptych. The mere characterization of Bosch’s paintings as ‘medical-magical-political’ sounds like sheer nonsense. Camille really takes it too far when he discusses a detail in the central panel of the Garden of Delights (the man and woman in the transparent sphere, bottom left): what we see here is a corrupt spot and a clumsy restoration, but according to the author Bosch has consciously painted an optical distortion in the woman’s body so that halfway her belly seems to have shifted a few millimeters. This results in the following comment [we translate the Dutch version]: ‘A woman had always been a distorted man, an inferior and even monstrous creature in the medieval logic of those who hated women, but here she is presented as a shifted image – as an impossible object of desire, somebody who is out of line and who is staggering forever’ [p. 165].