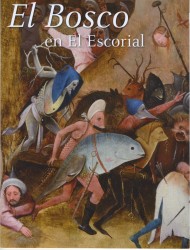 From March, 19 till November, 1 2016 the Real Monasterio de San Lorenzo de El Escorial hosted a small but interesting exhibition focusing on the ‘pintor flamenco’ (Flemish painter) Jheronimus Bosch and organised by the Spanish Patrimonio Nacional. It was accompanied by a 32-page guide (Spanish only) in which the works on display are introduced and amplified on. On display were two registers (libros de entregas) in which the arrival of Bosch paintings at the Escorial is mentioned, Bosch’s Carrying of the Cross (El Escorial), the Escorial version of the Haywain triptych and the Christ Crowned with Thorns panel (both attributed to Bosch’s workshop) and last but not least four tapestries (belonging to the Colección Real de Patrimonio Nacional) that were inspired by the Bosch oeuvre: The Garden of Delights, The Haywain, The Temptation of Saint Anthony and Saint Martin and the beggars. The French king Francis I (1494-1547) owned a similar series of tapestries, but these have disappeared during the French Revolution. The catalogue has some nice illustrations, among them interesting details from the tapestries.