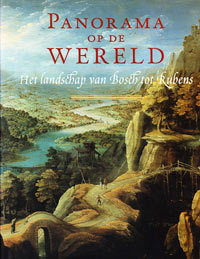 Apart from an introduction and a catalogue of the works on exhibition this publication offers the reader three scholarly contributions (written by Hans Devisscher, Edwin Buijsen and Koenraad Brosens). In his contribution Hans Devisscher writes about Bosch [p. 15]: ‘Whereas Van Eyck seems to be an observer, Bosch knows how to live his landscapes and bestows them with a very original atmosphere. Furthermore, in a number of his works – for instance in the central panel of the Haywain – he uses the sfumato technique because of which the backgrounds are gradually fading away. He also works with a triple colour scheme – a brown foreground, a green central part and a blue background, a method that will become very popular during the sixteenth and seventeenth century’.

The exhibition catalogue itself deals with five interesting works related to Bosch.

The most important part of the exhibition and of the catalogue is the comment (written by Paul Huys Janssen) accompanying catalogue number 1 [pp. 82-89]: the Valenciennes double panel. According to Huys Janssen ‘the former attribution to Hieronymus Bosch should be reconsidered’ [p. 86]. The two arguments he presents will be investigated below.

The two paintings are said to be of a high quality. What exactly Huys Janssen means by this, is not very clear in his text and personally we have always thought that the quality of these two paintings was way below Bosch’s level. Others share the same opinion. Although in 1927 Friedländer still considered this double panel an authentic Bosch, later literature has rejected its attribution to Bosch. In 1946 Combe pointed out that the side with the Antonite monastery has nothing to do with the art of Bosch (he considered the side with St James and Hermogenes an old copy of an original Bosch) [Combe 1946: 95, cat. nrs. 120 and 121]. Tolnay [1965: 384-385, cat. nr. 57] signalled the inferior quality of the whole panel and the fact that the brush technique is very unlike Bosch’s technique. Gerd Unverfehrt [Unverfehrt 1975: 135-137 and Unverfehrt 1980: 133-137 / 242, cat. nr. 7] went even further. According to him the Valenciennes double panel is not even a copy and it has to be situated at the borderline of recognizable Bosch influence. He dates the work circa 1500-10 and attributes it, together with three other works, to a Dutch master from Haarlem or Leiden, who was only mildly influenced by Bosch and who is given the provisional name of Master of the Valenciennes double panel.

Huys Janssen further signals that, as is the case in original Bosch paintings, the underdrawing can be seen in many places and that the coat of paint is very thin. Furthermore, the diabolical creatures are painted in the style of Bosch. But surely, technique and style are things that can be imitated? Huys Janssen also points out that the landscape in the St Anthony side of the panel agrees with the landscape in Bosch’s Prado Epiphany. We are not of ill will, but when we compare the two paintings, in one case we see the product of a brilliant painter at the top of his artistic skills, in the other the work of someone with a very mediocre talent.

All this goes to show once again that the opinion of art historians about style and quality can be very subjective, although this does not have to imply that all art historians are unreliable. It only means that some experts observe better than others. Regarding the case we are discussing here, it is impossible that the Valenciennes double panel is an original Bosch ànd at the same time hardly reminds us of the art of Bosch. Obviously, one of these two opinions is wrong. To us it seems then that Huys Janssen will have to produce stronger arguments in order to convince the Bosch experts of the authenticity of the Valenciennes double panel. But Huys Janssen has a second argument. Maybe this will have more evidential value…

This argument is related to the panel’s pedigree. In 1796, during the French Revoltion, the panel was confiscated from the Princes of Croÿ-Solre, a family whose ancestors had important functions at the Burgundian court. In the fifteenth and sixteenth century some members of the Van Croÿ family were art lovers, some of them visited ’s-Hertogenbosch every now and then and the name Van Croÿ appears in the registers of the ’s-Hertogenbosch Confraternity of Our Lady. Karel van Croÿ (1560-1612) owned five works that were attributed to Bosch back then. According to Huys Janssen, two of these, both representing a Temptation of St Anthony, are identical with the Valenciennes double panel, on the supposition that the archival source erroneously interpreted the St James and Hermogenes depiction as a Temptation of St Anthony.

These facts point out that the Van Croÿ family may have had contacts with Bosch circa 1500 and that Karel van Croÿ owned paintings by Bosch (or at least paintings that were attributed to Bosch), but that’s it. Indeed, how could the information provided by Huys Janssen unambiguously prove that the Valenciennes double panel is an original Bosch? When we check out the source Huys Janssen uses [Steppe 1967: 23], we find something remarkable. Steppe quotes an inventory (dated circa 1600) of the castle of the dukes of Croÿ in Heverlee near Louvain (the Arenberg castle today), and from this inventory it can clearly be deduced that the two Tempations of St Anthony Huys Janssen is referring to, had two separate frames and were even located in two different halls. How then can these panels be identical with the Valenciennes double panel as we know it, or do we have to suppose that in later times the two Van Croÿ panels were glued together?

It will be clear that Huys Janssen’s second argument is as weak as his first one and for the time being there is no reason at all to consider the Valenciennes double panel an orginal Bosch.