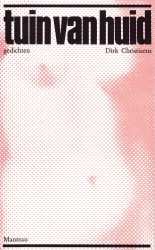 In this extremely weak and rather boring book of poetry Dirk Christiaens does little else but write short poems that are overloaded with surrealistic images inspired by the art of Bosch. This goes further ‘than some fragments’, unlike what Hugo Brems suggests in his review: every poem in this book is filled to the brim with images borrowed from Bosch.

Christiaens imitates the method already applied by Hugo Claus in his poem Visio Tondalis [sic]. Every once in a while even with almost literal echoes. On page 18 we read for example: ‘Not even a boat casts anchor in this land’. Whereas Claus wrote: ‘No boat in the sizzling water (…) / This is my motherland’. With Claus the stream of images (literally borrowed from a little-known Bosch imitation in Paris, see Unverfehrt 1980, ill. 225) fits in with a poetic vision, but Christiaens’ juggling with images only makes a gratuitous, disfunctional, incomprehensible and therefore aggravating impression. The difference between a good poet and a bad one?