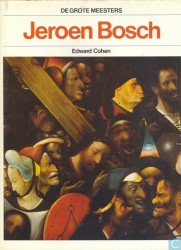 This ‘concise introduction for laymen and enthusiasts’ (according to the flap) follows in the wake of Bax and of those who consider Bosch to be a moralist. Hieronymus takes the weakness of sinful mankind to task with humour (sometimes tending towards sharp sarcasm) and with literal depictions of proverbs and idioms. Cohen believes he can add a few new insights to the research on Bosch. The most important of these is that in the Middle Ages nudity (as long as it had nothing to do with shameless vulgarity) was seen as less shocking than it is now. As a result a triptych such as the Garden of Delights is not erotic because of the naked figures, but because of the many symbols and attributes of unchastity it displays.

Cohen, himself Jewish, allots one chapter of his book to Jewish details in Bosch’s paintings and this leads to a few observations that have received little attention from Bosch scholars so far. He writes about the manual gesture of the Jesus Child in the Cologne Adoration of the Child: according to Cohen this a wrong representation of a typical Jewish blessing gesture, the kohaniem. [See also Cohen 1984 where he corrects himself by signalling that we are not dealing here with a Jewish but with a Christian ritual gesture.] Cohen further draws attention to the book in St. John’s lap on the Berlin St. John on Patmos (John is writing from right to left and so the text is in Hebrew, but Bosch made a mistake: the book should have been a scroll), to the hidden political meaning of the Rotterdam Wedding at Cana (Bosch is supposed to be jeering at the Jews here) and to the strange figure in the stable on the Madrid Adoration of the Magi. This person is supposed to be the Jewish Messiah, as can be told from the golden chain which (according to an old legend) is binding his hands together. The wound on his shin-bone, according to the Talmud characterizing him as a leper, is here covered by a transparent container.

Cohen is less convincing when (in the wake of Mosmans and Brion) he wants to recognize Bosch’s self-portrait in the Philadelphia Adoration of the Magi and the Madrid Crowning with Thorns. Downright far-fetched is his hypothesis that the figure of Christ in this latter painting is a portrait of Albrecht Dürer: according to Cohen Bosch is here mocking Dürer’s vanity, because the German painter sometimes depicted himself as Christ.