Jheronimus Bosch and Victor van Carben: the controversy between Church and Synagogue in some of Bosch's paintings 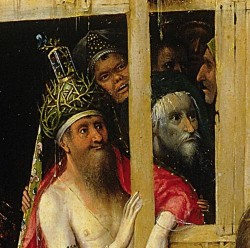 “Jheronimus Bosch and Victor van Carben: the controversy between Church and Synagogue in some of Bosch’s paintings” (Edward Cohen) 1984

Bosch’s oeuvre is critical, satirical and sarcastic and his criticism was directed at the sins of all layers of society. In some instances he also took to task the unfaithful Jews who did not acknowledge the Christian Messiah. In 1952 Fraenger already pointed out that on the Berlin Saint John on Patmos panel the saint is writing in Hebraic or Jiddish (from right to left). This may be meant as a caricature with the message: this is a baptized Jew, but he is still writing in the wrong way. The glasses of the little devil in the bottom right corner refer to the greedy Jewish soul. Cohen believes St. John is represented here as a baptized Jew who is still in doubt about chosing between his old and his new belief.

The pig’s head which is being served on the Rotterdam Wedding at Cana signals that we are dealing here with baptized Jews (as pork is out of the question on a Jewish table). The bifurcated snake-like tongue of the swan which is also being served, not only refers to the falsehood and unbelief of the Jews in Cana, but also to the unreliability of baptized Jews. Victor van Carben was a baptized Jew from Cologne, who became a priest and a member of the Fraternity of Our Lady in ’s-Hertogenbosch after his conversion. Is the swan’s tongue also a criticism on the admission of baptized Jews to the fraternity?

In 1953 Brand Philip interpreted the person in the stable on the central panel of the Madrid Adoration of the Magi triptych as the Jewish Messiah. Did Victor van Carben provide Bosch with information about the Jewish ideas concerning the Messiah? And should we recognize a portrait of Van Carben in both the Jewish Messiah and in Balthasar? Van Carben would then be represented as hesitating between his old and his new belief. Cohen detects a similarity between this Balthasar and Saint Christopher on the Rotterdam St. Christopher panel. Christopher is wading from one bank to another and could represent Van Carben who walks from the Jewish to the Christian belief and in doing so (as a priest) is aware of the increasing pressure of the Christian faith.

Some authors have recognized the Jewish blessing of the Cohanim in the manuel gestures of the Christ Child on the Cologne Adoration of the Child (the ring finger and middle finger are being held together). But according to Cohen this is not a Jewish, but a Christian gesture that can be found lots of times in paintings from the fifteenth to the eighteenth century. Mary also makes this gesture on the Madrid Adoration of the Magi. Apparently she wants to point out that the Child in her lap is the true Saviour, and not the man in the stable.

Bosch’s message was that Jews, whether baptized or not, are unreliable and that they don’t acknowledge Christ as the true Saviour, but this criticism was only part of his criticism on the sinfulness of the whole world, including Christians and churchmen.

Cohen’s article contains a number of hypothetical statements that are way out of line. Two things deserve attention, though. First what he writes about the manual gesture with which ring and middle finger are kept together (as a matter of fact Mary on the Adoration of the Magi does make such a gesture). And second: that some members of the Fraternity of Our Lady were baptized Jews. Apart from Victor van Carben there was also Jacob of Germany (Jacob van Aelmangiën) who was baptized in ’s-Hertogenbosch in 1496. It is a pity that Cohen does not give more information about this (apparently interesting) Victor van Carben, but instead limits himself to some hypotheses which can only be called far-fetched.