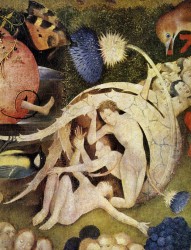 A first aspect of Bosch’s Hell imagery discussed in this article is the transformation and melting together of existing ideas and images from miniatures and manuscript illuminations. Cuttler links a number of motifs from the Hell tondo in Bosch’s Madrid Seven Deadly Sins panel (the soul who is tortured with hammers on an anvil, the burning tower, the hot lake, the soul who is put on the spit, the souls in a boiling kettle) to fifteenth-century French and Flemish miniatures. The potty-chair of the bird-devil in the right interior wing of the Garden of Delights can also be traced back to a miniature motif: the burning open cage in which souls are dropped.

A second aspect is what Cuttler calls the ‘double image’ effect. In this case the image is at the same time ‘allusive’ (it refers to well-known iconographic motifs) and ‘illusive’ (different motifs are melted together so that one image can have several meanings). The example Cuttler gives concerns the three man in a fruit skin in the central panel of the Garden of Delights: this skin is said to suggest the biting cap of a fool and at the same time the mouth of Hell. The opening of the blue sphere (floating on the water, higher in the central panel) is also said to refer to the mouth of Hell.

According to Cuttler Bosch was the ‘inventor’ of the double image in Northern Europe. In Southern Europe around this time the same technique was first applied by Piero di Cosimo.