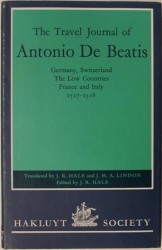 From May 1517 until March 1518 don Antonio de Beatis, canon of Molfetta, accompanied his patron, the wealthy 42-year-old Cardinal Luigi d’Aragona (whose chaplain and private secretary don Antonio was), on a journey through Italy, Switzerland, Austria, Germany, The Low Countries and France, jotting down his impressions and experiences in a travel journal. Covering an average distance of 39.5 kilometers a day, the Cardinal’s party (consisting of 35 mounts at the outset and of over 45 mounts at the end) travelled a total distance of 5.451 kilometers during which the Cardinal spent some 15.000 ducats.

Cardinal Luigi of Aragon (1474-1519), a bastard son of Marquis Enrico of Gerace (who himself was a bastard son of Ferdinand I, king of Naples) embarked on his northern tour of Europe with the desire to make himself known to the great rulers of his age (the Emperor Maximilian, the young king of Spain Charles V, the king of France Francis I and the king of England Henry VIII) and to make contact with the exiled members of his family although to a large extent it was also a pleasure trip. The Cardinal did not succeed in meeting Maximilian and Henry, but in July 1517 he met the 17-year-old Charles V (who was on the verge of embarking to Spain from the port of Flushing) at Middelburg [ed. 1979: 89-90] and in August 1517 he visited the French king in Rouen. According to De Beatis Francis I was ‘cheerful and most engaging, though he has a large nose and in the opinion of many, including Monsignor, his legs are too thin for so big a body’ [ed. 1979: 107-108].

In 1492 Luigi was married to a niece of Pope Innocent VIII but two years later the marriage was annulled by Pope Alexander VI and Luigi, at the age of hardly 20, was appointed cardinal (with Santa Maria in Cosmedin as his titular church). Luigi was rich, influential and well connected. In a letter to Cardinal Wolsey (dealing with the issue whether it would be suitable to have Luigi visit England), Sir Thomas Spinelly, Henry VIII’s agent in Calais, wrote about him: ‘The said Cardinal’s profession is rather of a temporal lord than spiritual’ [ed. 1979: 10]. An echo of this English allegation may be heard in the perhaps somewhat surprising number of passages in which Antonio de Beatis (being a cleric writing for a cleric) pays attention to the looks of the women in the regions the Cardinal’s company visited. The women in Germany are ‘good-looking and pleasant’, even ‘libidinous’ [ed. 1979: 80], the women in The Hague are ‘particularly beautiful’ [ed. 1979: 91], the women in Lyons are ‘some of the most beautiful in France’ [ed. 1979: 139], the women in Avignon are ‘very attractive’ [ed. 1979: 148] and so are the women in Nice and Genoa [ed. 1979: 163/178] whereas the women in Normandy and Picardy are ‘ugly’ [ed. 1979: 106] and the women from the Riviera are ‘as plain as can be’ [ed. 1979: 178]. Although the editors inform us that late medieval travel literature ‘irresistibly reflected after-dinner conversation’ they also remind us that ‘there was nothing professionally celibate about the functions at which [Luigi and Antonio] were entertained (or, as we know, about the Cardinal’s personal life)’ [ed. 1979: 43-44]. When Cardinal Luigi attends a public banquet in Avignon in November 1517, De Beatis records: ‘Many beautiful ladies were present, and after dinner there was dancing until midnight with unconstrained merrymaking and diversions’ [ed. 1979: 151].

Personal notes on De Beatis’s part are very rare in this travel journal, the only noteworthy exception being the occasion when one night, during their stay at an inn in Pont-de-l’Arche on 4th September 1517, some personal belongings and some cash were stolen from his saddle, a memory that is immediately followed by a sharp attack on the French common people who ‘are as contemptible, idle and vicious as can be imagined’ [ed. 1979: 111-112]. Further, De Beatis’s text displays all the characteristics of a Renaissance travel journal [ed. 1979: 22]: dated entries, the giving of place-names where the mid-day meal was taken as well as where the night was spent, a note of the distance travelled each day, descriptions of important isolated buildings and of the countryside, accounts of the walls, streets, squares, houses, monuments and inhabitants of towns, extended essays on the most notable human and physical features of whole regions and pen portraits of notable persons encountered en route.

As a result, the quality of the cultural-historical information delivered by this text can hardly be overrated. Just a few of the most noteworthy things are the following.

One of the main reasons why De Beatis’s travel journal has become famous among art historians is the fact that it has the oldest description of Jheronimus Bosch’s Garden of Earthly Delights triptych (today: Madrid, Prado) [ed. 1979: 94]. On July 30, 1517 (Bosch was buried on August 9, 1516) the Cardinal’s company visits the palace of the Count of Nassau, Henry III, in Brussels. In his journal De Beatis writes, after having signalled that the palace has very beautiful paintings, ‘among others a Hercules and Deianeira, naked figures of considerable size, and the story of Paris with the three goddesses most perfectly done’: Ce son poi alcune tavole de diverse bizzerie, dove se contrafanno mari, aeri, boschi, campagne, et molte altre cose, tali che escono da una cozza marina, altri que cacono grue, donne et homini et bianchi et negri de diversi acti et modi, ucelli, animali, de ogni sorte et con molta naturalità, cose tanto piacevoli et fantastiche che ad quelli che non ne hanno cognitione in nullo modo si li potriano ben descrivere [as quoted in Steppe 1967: 8 and Gombrich 1967: 403-404]. In 1976 Ernst Gombrich translated this passage as follows [Gombrich 1976: 79]: ‘Then there are various panels with diverse fancies where there are represented seas, skies, woods and fields with many other things; some who come out of a seashell, others who defecate cranes, men and women, both white and black in various actions and positions, birds and animals of every kind and with much truth to nature, things so pleasing and fantastic that it is quite impossible to describe them to those who have not seen them’.

In 1962 Jan Karel Steppe was the first to relate this passage to Bosch’s Garden of Earthly Delights [in: Jaarboek Koninklijke Vlaamse Academie voor Wetenschappen, Letteren en Schone Kunsten van België, 1962, pp. 166-167]. In 1967 he repeated his observation in a contribution to the catalogue with scholarly essays published on the occasion of the 1967 ’s-Hertogenbosch Bosch Exhibition [see Steppe 1967: 8-11] and in the same year Ernst H. Gombrich published an article with the same observation in the Journal of the Warburg and Courtauld Institutes [see Gombrich 1967], reprinted with some minor alterations in his book Gombrich on the Renaissance – Volume 3: The Heritage of Apelles (1976, second edition: 1993). Whether Gombrich’s article owed something to Steppe or was written independently, remains unclear.

Except for one detail, everything mentioned by De Beatis can also be seen in Bosch’s triptych and with the alcune tavole he may have meant the three panels of a triptych. The only thing that does not fit, are the figures defecating cranes. Then again, in the right interior panel black birds are appearing from the anus of a person tortured in Hell, but these are not cranes but probably swallows. And yet: how disappointing is the superficiality of this oldest and for modern Bosch scholarship so valuable source! Gombrich [1967: 405] observed: ‘Antonio de Beatis looked at some of the bizarre details, but does not seem to have searched for a meaning in the whole. The tone of his description suggests entertainment rather than horror or anxiety’. Indeed: what we get is a (short) list of remarkable details, but no subjects of the different panels, no title, no attribution to an artist and no overall iconographic interpretation. Did De Beatis’s company lack the time to go deeper into the painting(s), did they happen to have a lousy guide that day or were the people at the Nassau Court ignorant about the triptych’s message themselves? Very improbable, one year after the painter’s death.

As is explained by both Steppe and Gombrich, we can be sure that De Beatis was indeed describing the Garden of Earthly Delights as some fifty years later, in 1568, Bosch’s triptych was confiscated by the Duke of Alva in the same Brussels palace, at that time owned by William of Orange (the Silent), heir to his uncle René of Châlon (who died in 1544), himself heir to his father Henry III of Nassau (who died in 1538). After the confiscation the Garden of Earthly Delights was acquired by don Fernando de Toledo (Alva’s bastard son) and when he died the triptych was sold to Philip II in 1591. In 1593 Philip II had the painting sent to the Escorial.

Although De Beatis’s text has been of major importance regarding the triptych’s pedigree, unfortunately it is of little use when it comes down to an iconographic interpretation. This may seem somewhat surprising considering the triptych’s overt eroticism (mainly in its central panel) and Cardinal Luigi’s reputation of seeming more a ‘temporal lord’ than a spiritual one (see above). In this respect it is very telling that Henry III’s other paintings mentioned by De Beatis also seem to focus on eroticism: the life-size naked figures of Hercules and Deianeira (probably the Jan Gossaert painting today in the Barber Institute in Birmingham, as is signalled by Gombrich) and a Judgment of Paris, more than likely depicting three naked goddesses. What De Beatis does not fail to mention either is the huge bed in Henry III’s palace: ‘There is also a large room containing a bed 34 spans di canna broad and 26 spans long with bolsters at the head and the foot, sheets and a white quilt, and we gathered that the Count had it made because he liked to hold frequent banquets and to see his guests get drunk, and when they could no longer stand on their feet, he had them thrown on to this bed’ [ed. 1979: 94-95]. This same bed (in which 50 people could lie down) was also mentioned by Albrecht Dürer when he visited Henry III’s Brussels palace in August 1520 [see Dürer 1520-21] and it was also mentioned in the hitherto unpublished guidebook to Western Europe in which an anonymous Milanese author describes his journeys undertaken between 1516 and 1519: according to this author the huge bed was the major curiosity in the Brussels palace of the Count of Nassau [ed. 1979: 53-54, British Museum, Add. MSS. 24180].

De Beatis’s partially inaccurate and at any rate superficial description of the Garden of Earthly Delights may be explained by the fact that he had to rely on his memory when writing out his observations of the day and perhaps also by the fact that neither he nor his patron were great art lovers [as is also suggested in ed. 1979: 155 (note 2)]. When De Beatis writes about the Lamb of God altarpiece in Ghent [ed. 1979: 96] he commits errors as well: he attributes the painting to Robert (instead of Hubert) and his brother and claims that the subject of the work is ‘the Ascension of the Madonna’, whereas this should be the Adoration of the Lamb. De Beatis’s travel journal also has other minor mistakes (compare the footnotes in ed. 1979). A striking example, not directly related to art, is his mentioning a walled town called Imbruch ‘four leagues from Bruges’ on the way to Nieuwpoort [ed. 1979: 97]. De Beatis’s editor J.R. Hale was unable to locate the place and so are we.