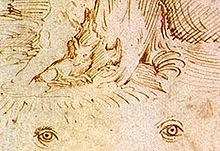 When analyzing the iconography of Bosch’s works we should be aware of interpreting certain motifs too fast: even though the same iconographical element returns several times, it can often be interpreted in different ways, depending on the immediate context in which it occurs.

In the works of Bosch that are generally accepted as authentic there are four foxes. The fox in the central panel of the Garden of Delights triptych can be related to eroticism and unchastity because of the phrase hoenderdief (= chicken thief = fox), which in sixteenth-century Middle Dutch texts often refers to people who are dealing with suspicious, secret erotic acts in general and with the visiting of brothels in particular. The scene with a fox, a chicken and a rooster in the left inner wing of the Vienna Last Judgment triptych is meant as an allegorical echo of the Fall of Man scene: the fox referring to the devil, the chicken to Eve and the rooster to Adam. The detail with the dead fox, dangling with its hind legs from a tree, in the Rotterdam St. Christopher panel can allegorically be interpreted as a victory over the devil.

Together with the birds and their nests that are spread across the panel the sleeping fox in the left bottom corner of the Ghent St. Hieronymus can be related to the biblical lines: ‘The foxes have their holes and the birds have their nests but the Son of Man has nothing on which He can lay down his head’ (Matthew 8: 20 and Luke 9: 58). In Middle Dutch literature from the thirteenth up to the sixteenth century there is a clear tradition associating these lines with the pursuit of chastity and voluntary poverty. In this context the fox and the birds have a negative connotation: they are interpreted as references to the reprehensible vanity of earthly things and seen as the complete opposite of Christ’s voluntary poverty. Very likely Bosch had the same association in mind, as the pursuit of chastity and voluntary poverty was an important theme in late-medieval texts about St. Hieronymus. Furthermore Bosch painted the fox and some of the birds while they are sleeping, which can be related to the medieval topos equating sleep with a state of sinfulness.

In the works of Bosch the fox can be associated with unchastity, sinfulness and the devil and these connotations neatly fit in with the negative image of the fox in (late-)medieval literature and iconography.