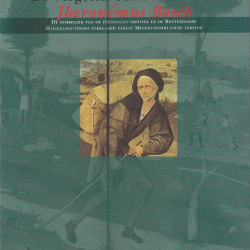 In the past century an immense and highly contradictory amount of scholarly books and articles have been written about Bosch, resulting in academic controversies and polemics until very recently. Nevertheless, an axioma all Bosch scholars agree upon is: Bosch’s paintings can be considered allegorical representations, implying that they constitute a whole of closely interrelated metaphors. In the past some scholars have tried to interpret Bosch’s allegories by referring to alchemy and astrology, to heretical ideas and even to modern psychoanalysis, basing themselves on the idea that Bosch painted some sort of personal secret language. However, their methodological approach did not meet the appropriate scholarly standards and the results of their studies are highly questionable.

Time and again, the cultural-historical gap of 500 years between the Late Middle Ages and our times seems to cause a major lack of communication, not only because the modern viewer of late-medieval paintings (including those of Bosch) is not familiar with the allegorical way of thinking but also because in most cases he or she no longer understands the correct meaning of particular metaphors (and of their intrinsic relations). Therefore, the key thesis of this dissertation is: the only way to learn and to understand the allegorical language that is so characteristic of late-medieval culture is to become familiar with as many contemporary iconographic and (because of the reduced risk of committing interpretave errors) textual sources as possible. Regarding the art of Bosch, fifteenth- and sixteenth-century Middle Dutch moralizing and devotional texts seem to offer a vast quantity of material that may contribute to a better understanding of Bosch’s imagery. The confrontation of Bosch’s subjects and motifs with Middle Dutch texts soon leads to the conclusion that a number of metaphors, symbols and ideas frequently occur, thus turning into topoi (commonplaces) that were fairly easy to interpret for a medieval person having enjoyed an average or advanced intellectual training.

Bosch did not paint some sort of personal secret language (although when combining topical elements he often seems to have possessed a high amount of creativity and originality), but rather devotional allegories, meaning that his paintings convey a religious-didactic Christian message focusing on the choice between Good and Evil. In this book all this is being demonstrated by referring to the exterior panels of the Haywain triptych (known to us in two versions: Madrid, Prado and El Escorial) and to the tondo in the Rotterdam Museum Boijmans Van Beuningen. The protagonists of these panels are pedlars (a pedlar being a travelling merchant carrying his merchandise in a basket on his back). The iconography of both pedlars is very similar: together they make up one of the rare visual echoes within the art of Bosch.

The structure of this dissertation is as follows. After a discussion of the applied methodology (which concurs with the so-called iconographical-iconological approach) and a brief survey of the literature about the interior panels of the Haywain triptych, an elaborate iconographical analysis of the central panel and the interior wings of this triptych is offered. In these panels a double theme can be found: on the one hand the World, Flesh and Devil idea (in the Middle Ages a handy formula referring to earthly vanities and physical lust used by the devil to tempt weak and sinful mankind), on the other hand an eschatological perspective warning of the impending Last Judgment. The interior panels’ major theme is the notion that thanks to Christ’s unending love and sacrifice (Christ died at the Cross in order to save sinful mankind from eternal doom) each repentent sinner can always count on divine grace, and thus on a blissful life in the Hereafter.

Next follows an extensive critical survey of former art-historical research on the exerior panels of the Haywain triptych and on the Rotterdam Pedlar tondo (in the past often given the erroneous title The Prodigal Son). The methodological insights resulting from this survey serve as a basis for the author’s own iconographical analysis. As the protagonist of both the Haywain’s exterior panels and the Rotterdam tondo is a pedlar the reader is first offered a profound cultural-historical study of the pedlar figure in late-medieval urban literature and art in the Netherlands (focusing on the duchy of Brabant). This study leads to the conclusion that the pedlar was associated with both negative and positive things circa 1500. These latter connotations have been completely neglected by Bosch scholars in the past.

Finally the author offers a meticulous and detailed analysis of Bosch’s Pedlar images, based on these cultural-historical data. This leads to an overall interpretation suggesting that every detail harmoniously fits in with the allegorical puzzle of the paintings: Bosch’s pedlars represent man who is repenting his sinful past and now turns back to God. In the Haywain triptych this motif perfectly matches the eschatological message of the interior panels.

In this way, this study shows that Bosch’s idea about mankind was not as pessimistic as has been suggested by some Bosch scholars. Many of these strongly focus on Bosch’s images of devils, hell and sins but ignore the fact that this painter always refers to the good example and the way to overcome sinful temptations as well. This pivotal theme (even the greatest sinner may be forgiven if he is repenting) is not only the key notion of Bosch’s art but can also be considered one of the most important messages of Christian doctrine as such.