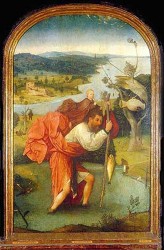 In the Boijmans Van Beuningen Museum (Rotterdam) there is a Bosch panel depicting Saint Christopher (who was a giant) carrying the Christ child on his shoulders. Although the main subject is easy to identify, a number of motifs are more difficult to understand. This article focuses on the weird withered tree painted to the right of the saint and tries to show that Dirk Bax was right in 1948 when he wrote that the tree, containing Christopher’s shelter, is turned into a brothel by the devil to tempt the saint.

Bosch has taken elements from the saint’s legend (such as the hermit and the shelter in the tree) but modified them in order to visualize the work of the devil. The broken pitcher is also a clear example of this. From a fourteenth-century German poem about Christopher we learn that a hermit took to his heels when he saw the giant and while doing so, he dropped the pitcher with which he was fetching water. Why Bosch equipped the diabolical tree with a broken pitcher can be derived from Middle Dutch literature. In the first place a fragile pitcher is used as a metaphor for the sinfulness and transitoriness of mankind in texts around 1500. Furthermore the motif also had an unfavourable erotic connotation: a ghebroken potken (broken pitcher) could refer to an unmarried girl who lost her virginity, to a promiscuous woman or to a prostitute. Other motifs of the Rotterdam panel, such as the dovecote, the spitted chicken and the lantern, can also be linked to prostitution.

All this makes it very likely that the tree house is meant as an allegorical reference to prostitution. But what is the link between Saint Christopher and prostitution? In one of the episodes from Christopher’s legend the saint is tortured and locked up in a dungeon with two prostitutes who have to seduce him. In vain, of course, and Christopher is even able to convert the two girls. In another (German) version of the legend it is the devil himself who tries to seduce Christopher in the shape of an attractive prostitute. In late-medieval times Saint Christopher was seen as an exemplary person who turned away from all earthly vanities. He could successfully be called upon as a protector against the plottings of the devil.