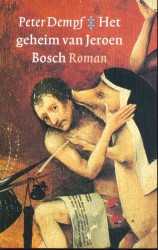 The German art historian Michael Keie is temporarily employed by the Prado Museum in Madrid where he is working on the restoration of the Garden of Delights together with his Spanish colleague Antonio de Nebrija. A short time before this triptych painted by Hieronymus Bosch was sprinkled with a corrosive fluid by an apparently insane Dominican monk, fortunately without causing too much damage. To their big surprise Keie and De Nebrija discover hidden, vague letters and images on photographic enlargements of the damaged spots, initially not knowing what to think about them. With the help of the psychologist Grit Vanderwerf (who seems to be very interested in the discoveries of Keie and De Nebrija) they get in touch with the man who committed the assault: father Johannes Baerle, who is temporarily locked up in a monastery. This monk claims to have discovered a manuscript in a Cologne library that was written by a certain Petronius Oris in Bois-le-Duc (’s-Hertogenbosch) in 1511. This Petronius Oris was one of Bosch’s pupils and the Inquisition forced him to write down his own history.

In the rest of the novel the history of Petronius Oris is retold by father Baerle, with regular switches to the present moment that focuses on the further investigation of the Garden of Delights and on the irregular contacts between the two art historians and father Baerle, who sometimes escapes and disappears and then turns up again. In this way we learn that Oris was a German painter who was accepted as a trainee by Bosch. Thanks to Zita, a waitress in a local pub in ’s-Hertogenbosch, Oris finds out that Bosch belongs to a secret heretical sect, the Adamites, who regularly gather – all in the nude – in a hidden hall inside the Saint-John’s (in those days still a church and not a cathedral, as Dempf erroneously writes), at which gatherings the Garden of Delights functions as a symbolical representation of the heretical ideas of the sect. The leader of the secret society is the mysterious Jacob van Aelmangien, a baptised Jew who, just like Bosch, is on hostile terms with the Dominican Johannes Baerle, the leader of the local Inquisition. Van Aelmangien knows a lot about alchemy and uses an ointment to bring Bosch into a trance in order to extract symbolical material from his subconscious that can be incorporated in the Garden triptych. Later it is suggested that the same is happening to Petronius Oris, but without his being conscious of it.

Until halfway this novel Peter Dempf reminds us of Hubert Lampo at his best. He succeeds in creating a magical-realistic atmosphere that raises all kinds of questions but without offering any clear answers, for the time being: what is the hidden message of the Garden of Delights, who is this Grit Vanderwerf, why has this Spanish Dominican monk borrowed the name of his sixteenth-century predecessor, what were these late-medieval Adamites up to and who committed the weird murders in ’s-Hertogenbosch in 1511? In the second part of his novel Dempf is forced to come up with more specific details, and at a certain moment the reader is getting somewhat impatient (and in the worst case bored), also because the plot is becoming rather complicated and far-fetched.

Thanks to Zita Petronius Oris becomes a member (but not yet an initiate) of the sect. But very soon he loses his membership again because… his ‘member’ becomes erect during one of the sermons: thése Adamites – as opposed to those of Wilhelm Fraenger – run around naked, but disapprove of sexual intercourse out of wedlock! Because father Baerle wants to use Oris as a spy in order to expose the sect, Petronius is more and more caught between two fires and the whole situation becomes even more complex when he discovers that Jacob van Aelmangien is in fact a woman and that Zita works as a spy for the Inquisition. Eventually Oris is tortured and imprisoned by the Inquisition (after which he starts to write his history) but Zita, who has fallen in love with him, helps him to escape so that he can take the Garden of Delights to a safe place: Hieronymus Bosch’s country place. There he not only meets Hieronymus Bosch himself but also Jacob van Aelmangien and when this latter finds out that Oris knows his true identity, Oris and Zita have to run to France (with Oris’ manuscript).

Meanwhile in the present Keie and De Nebrija have discovered more hidden symbols (such as a Venus sign on the right inner wing) on photographic enlargements and with the help of Grit Vanderwerf they finally find out the hidden message of the Garden of Delights. The Adamite sect appears to have been a feminist movement that was informed about the fact that human history progresses according to astrological cycles. In the past, perhaps 10.000 years ago, in the Age of Leo, matriarchy was replaced by patriarchy and the Age of Pisces began. A secret society of women has been passing on this knowledge for ages and the Adamites were a late representative of this society. They also knew that at the dawning of the Age of Aquarius (in which we are now living) women would come to power once again. In the Middle Ages the Church (governed by men) had found out about this conspiracy and that is why it wanted to wipe out these feminine sects. So basically the Garden of Delights was an attempt to pass on this secret knowledge to future generations and signals the end of the Age of Pisces, of the Catholic Church and thus of masculine predominance. And that is why (the modern) father Baerle wanted to destroy the Garden of Delights with corrosive acid.

As has already been mentioned above, for the average reader all this has become far too much, but Dempf still has other things up his sleeve. In the last pages of the novel Keie starts to doubt whether the enlargements really show hidden signs and symbols (it could also be small cracks in the wood of the panels) and a little bit later Grit tries to convince him that Bearle is really insane and that there is no proof of the existence of Petronius Oris’ manuscript. Father Baerle is supposed to have made up the whole story and Grit has only played along with him because, as a psychologist, she was interested in Baerle’s madness.

At the end of the book Michael Keie and Grit Vanderwerf sleep with each other. Probably Dempf is trying to tell us here that a cyclical alternation of feminine and masculine predominance is total rubbish and that men and women should live in harmony together but that does not turn this book into a strong novel. As soon as one realizes that after a promising start The Secret of Hieronymus Bosch perishes because of a heavily laden, too extravagant plot that fails to live up to its ambitions, a series of less important flaws come to add to this feeling of disappointment. For example: it is totally unconvincing that the story of Petronius Oris (a so-called late-medieval manuscript retold in the present by a monk) does not show any basic stylistic differences from the story of Michael Keie. Of course: to imitate the style of a sixteenth-century manuscript (be it an imaginary manuscript or not) asks for quite an amount of professional skill and Dempf is obviously not Umberto Eco in this respect. All the more so because his plot shows some small technical inaccuracies.

On page 225 the narrator (Petronius Oris) tells something that normally he cannot know at that moment (namely that Van Aelmangien has used his secret alchemical laboratory since the arrival of the Dominicans in the town, meaning: long before Oris’ arrival in ’s-Hertogenbosch), and on page 142, without further explanation, both the Adamites and Henry III of Nassau are mentioned as patrons of the Garden of Delights (in the rest of Oris’ story Henry III has no part at all). On page 192 an actor is completely dressed in red, whereas in the following paragraph he is wearing a costume that is as black as the night.

That this novel should not be read by those who want to learn more about the historical person Bosch or about the meaning of his Garden of Delights, is hopefully a redundant statement. For Bosch scholars it is obvious that Dempf has been inspired by the German author Wilhelm Fraenger who half a century ago came up with the hypothesis (built on quicksand) that Bosch was a member of the heretical Adamite sect, presided by a certain Jacob van Aelmangien, a baptized Jew who was dragged up by Fraenger from the ’s-Hertogenbosch city archives and provided with an utterly fictitious biography. On page 249 Fraenger is briefly mentioned and on page 334 there is even a quote of the motto that precedes the 1975 edition of Fraenger’s collected texts on Bosch (you only see what you know). Yet, Dempf has gone his own way by expanding on Fraenger’s ideas, something he cannot be blamed for as long as the word ‘novel’ is explicitly mentioned on the cover of his book. And in that case The Secret of Hieronymus Bosch may be called the umpteenth remarkable specimen of modern Bosch reception.