Water, Wine, and Blood - Science and Liturgy in the Marriage at Cana by Hieronymus Bosch 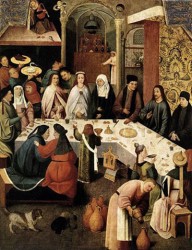 “Water, Wine, and Blood – Science and Liturgy in the Marriage at Cana by Hieronymus Bosch” (Laurinda S. Dixon) 1982

In this article Dixon suggests that the liturgical symbolism of Bosch’s Wedding at Cana panel (Rotterdam) can also be read within an alchemical context. The Wedding at Cana, the transformation of water in wine and of wine in blood were Christian elements that were used in a symbolical way by late-medieval alchemists. Dixon also recognizes alchemical utensils and symbols in the objects on the ‘domestic altar’. The moon symbolism that can be recognized in several details of the panel also has a double liturgical/alchemical meaning.

In the fifteenth century alchemy was a popular pastime ànd a respected science. At least one of Bosch’s family members was a chemist, but apart from this there were more than enough late-medieval alchemical texts in Latin and in Dutch that Bosch may have read without too much trouble.

It is remarkable that Dixon does not spend a single word on the negative attitude towards alchemy of many late-medieval moralists. Meanwhile, dendrochronological research has pointed out that the Rotterdam Wedding at Cana panel can only have been painted after 1555. Of course, it may still be a copy of a (lost) Bosch original.