Joachim Patinir - Landscape as an image of the Pilgrimage of Life 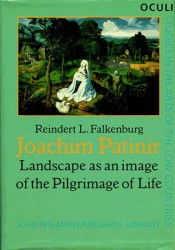 Bosch’s ‘vagabonds’ in Madrid and Rotterdam have been said to represent the pilgrimage of life theme (Tolnay, Raupp). Falkenburg’s thesis is: Bosch has started a tradition (namely the depiction of a pilgrimage of life in which the landscape plays an important part) that was flourishing from the early sixteenth up to the seventeenth century. Falkenburg wants to find out whether Patinir’s landscapes (under the influence of Bosch) also represent the journey of life, the pilgrimage of life [p. 2]. Earlier authors who wrote about Patinir (Goethe for instance, but particularly Koch, and also others) suggested that with Patinir the landscape is autonomous [p. 12]. Falkenburg wants to demonstrate that Patinir’s landscapes not only serve an esthetical purpose, but are deeply rooted in the religious and ethical thinking of the Late Middle Ages and that they are related to late-medieval devotional art [pp. 12-13]. He will study the landscape in four Patinir paintings: Rest on the Flight into Egypt (Madrid), Charon (Madrid), Hieronymus (Madrid) and Hieronymus (Paris). These four paintings should be considered ‘meditations on the pilgrimage of life’ [p. 13].

Part I : The figural element in Patinir’s landscapes and the iconographical traditions of the late-medieval ‘Andachtsbild’

In representations of the Rest on the Flight into Egypt the travel requisites metaphorically refer to Christ’s pilgrimage of life. This motif can also be found in devotional texts of the Vita Christi tradition. In this way, these paintings encourage the spectator to imitate Christ’s pilgrimage of life [p. 72]. Patinir’s landscapes derive from the compositional type ‘Andachtsbild with secondary scenes’ in three different ways…

Part II : Landscape as an allegory of the pilgrimage of life

Falkenburg suggests that Patinir’s Charon represents the bivium idea (the choice between the good and the evil path). Patinir was familiar with the complex symbolism of the bivium and the landscape symbolism related to it [p. 117]. Falkenburg then analyzes Patinir’s other landscapes but in order to do that he first has to focus on Bosch.

In Southern Netherlandish art circa 1500 the pilgrimage of life motif as the major subject of a painting can only be found with Patinir and with Bosch, namely in the exterior panels of Bosch’s Haywain triptych and in his Rotterdam Pedlar tondo. Falkenburg calls the protagonists of these Bosch panels ‘vagabonds’. Some ten interpretations of the Rotterdam Vagabond have already been suggested but scholars don’t agree about the exact meaning of this painting [p. 124]. However, a number of these interpretations have something in common: the protagonist is thought to be a pilgrim of life (homo viator peregrinans). Zupnick and Gibson have demonstrated this in a convincing way [pp. 124-125]. The vagabond, the homo viator, seems to have turned away from the evil path of life, but he is still tempted by sin to which he will perhaps give in. In the exterior panels of the Haywain the path is narrow. The ‘magpies’ (read: crows) and the horse’s carrion carry sinful connotations. The unreliable bridge refers to trials and temptations. The rest of the landscape refers to the sinful world (a traveller is being robbed, shepherds are making music and dancing, the execution). Perhaps what we see here is an opposition between the landscape (the sinful world) and the difficult path of life of the viator.

The Rotterdam tondo shows the same subject matter. The vagabond’s clothes refer to poverty and to the inclination to sin. According to Tuttle the vagabond has become poor because he visited brothels, which means: no voluntary poverty. According to Falkenburg the vagabond can still be a pilgrim of life: a pilgrimage does not exclude temptations and giving in to them. The cow and the magpie are probably negative symbols. Bosch wanted to represent the opposition (originally an idea of St Augustine) between the sinful world, the civitas terrena (the landscape from the inn to the wheel) and the viator’s difficult path [pp. 125-126].

Circa 1500 the joined metaphors of the pilgrimage of life and the bivium were a motif in both literature and iconography (namely with Bosch) [pp. 128 / 152]. Falkenburg suggests that this was also the case with Patinir. The wild mountain landscape in Patinir’s St Hieronymus (Paris) refers to St Hieronymus’ exemplary choice of the difficult path of life. The wilderness with the saint forms a harmonic unit with the mountain landscape (the difficult path of the pilgrim of life) whereas the inhabited, cultivated region (civitas terrena) refers to the sinful world [pp. 128-130].

In the background of Patinir’s Madrid St Hieronymus we also see the sinful world. There are details in the landscape confirming this (although they are not really conspicuous) [p. 132]. Here we see the same opposition as in Paris: on the one hand rocky mountains (the difficult, good path of life), on the other a flat landscape (the easy, sinful path) [p. 133]. The lion whose paw is cured from a thorn encourages the viewer to extract ‘the thorn of sin’. The rest of the landscape is the sinful world. The dark clouds refer to the impending fall of the sinful world [p. 135]. In the lower right corner we see a blind man and a boy walking towards a narrow bridge: they are false pilgrims (according to Jones Hellerstedt they are moving away from the monastery). The narrow bridge is a temptation they will have to withstand in order to be tested [pp. 136-137].

The merging of the pilgrimage of life and bivium motifs is found in Patinir’s Charon (Madrid) and in his St Hieronymus paintings (Paris, Madrid). Is this also the case in his Rest on the Flight into Egypt (Madrid)? Falkenburg will first analyze the foreground details and then the background landscape [p. 137]. In a late-medieval text the Flight into Egypt is compared to Christ’s pilgrimage of life. This is probably also the case with Patinir. Are there any metaphors in the landscape that can be related to this? We see the same kind of motifs that can be seen in the landscapes of Patinir’s St Hieronymus panels. So, the landscape in Rest on the Flight into Egypt could also represent the sinful world [p. 140]. Other details referring to sin are: a defecating man, a sow with piglets, a dovecote, a pig in a sty, beehives, an archer shooting at birds (the devil hunting for souls), a Romanesque building with Byzantine-Eastern features (the infidels) and a contemporary-indigenous Gothic building (the Christians) (according to Panofsky) [pp. 141-144]. We also find the bivium motif here: on the one hand a cultivated landscape, on the other a wild mountain landscape [pp. 144-145]. The stronghold in the mountains may refer to Heaven [p. 145]. The stronghold at the foot of the mountain may refer to the pilgrim’s temptations [p. 146].

The figures of these four Patinir paintings point out that we are dealing with devotional images (Andachtsbilder) with secondary scenes, and so with meditational images. The pivotal motifs in the landscapes are the pilgrimage of life and the bivium, they can even be found in the details (wild nature referring to the good path, the inhabited world referring to the evil path). These four Patinir landscapes can thus be interpreted as meditational images focusing on the pilgrimage of life [p. 148]. This is also the case in other Patinir landscapes, i.a. in the Madrid St Christopher. Falkenburg does not further discuss this painting (and its Bosch influence) because he does not understand it [p. 149].

Thematically Patinir concurs with traditional types of representation but he further elaborates the symbolism of the landscape [pp. 151-152]. It would be interesting to know more about Patinir’s patrons. We only know one purchaser: the Augsburg merchant Lucas Rem [p. 152]. Patinir stood at the outset of a tradition that was continued by Herri met de Bles and others [pp. 154-158].

A minus of this dissertation is that at a crucial moment of the argument (namely the discussion of Bosch’s ‘vagabond’ figures) the author relies too much on modern literature about Bosch, and too little on contemporary, late-medieval texts. This objection can also be forwarded more than once when Falkenburg discusses symbolical details of Patinir’s paintings. Nevertheless, in spite of some serious and less serious observational errors (the ‘vagabonds’ are in fact pedlars, the magpies in the extorior panels of the Haywain are crows) Falkenburg’s analysis of Bosch’s Pedlar panels makes a good impression. The pilgrimage of life and bivium motifs definitely play an important part in these paintings. A handy summary of this dissertation by the author himself can be found in: R.L. Falkenburg, “Iconographical connections between Antwerp landscapes, market scenes and kitchen pieces, 1500-1580”, in: Oud Holland, vol. 102 (1988), nr. 2, pp. 114-126 [in particular pp. 115-118].