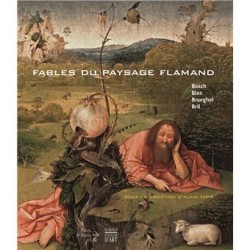 Bosch’ representations of devils and hellscapes have a basically religious meaning. It is often suggested that the sixteenth-century devilries produced by Bosch followers deviated from this concept and only had an entertaining function. Falkenburg does not agree with this and takes The Temptations of St Anthony as an example to explain his point of view.

The minute rendering of the religious key message can already be seen in Bosch’s Lisbon St Anthony triptych (Anthony and Jesus in the middle of the centre panel). The neighbouring scenes all refer to dissimilitudo, i.e. sinfulness and the deviation from the divine. To represent this, Bosch made use of ‘double images’ (the French has: images traîtresses). As an example of this, Falkenburg considers the onion-like building (centre panel, upper right) a brothel, but one with human-like aspects (a neck, a navel and below a small gate that suggests a vagina). Some Bosch followers also painted ‘double images’. Falkenburg then reiterates what he has written in his monograph on the Garden of Delights concerning the Hellscape panel (Madrid, Prado), the Temptation of St Anthony by Jan Mandyn (Harlem) and the small Earthly Paradise panel in Vienna (Kunsthistorisches Museum) [see Falkenburg 2011: 35-41 / 42-45 / 27-28]. He concludes that the sixteenth- and seventeenth-century devilries allowed the spectator to give free rein to his imagination and aesthetic appreciation.

This contribution may seem somewhat confusing for those who have not read Falkenburg 2011 (itself not exactly easy reading either). For example, Falkenburg does not explain the origin of the phrase ‘dissimilitudo’ here. But also for those who have read Falkenburg 2011, this contribution is rather demanding, which is partially due to the somtimes sloppy (French) editorial work. On pp. 60-61, when Falkenburg discusses the Prado Hellscape panel, the reader is referred to catalogue number 25, whereas this should be 33. When Falkenburg deals with the small Vienna panel (p. 62), the reader is referred to illustration 3, whereas this should be catalogue number 53. Furthermore, the (wrong) illustrations 5 and 6 accompanying Falkenburg’s contribution show that the editors did not understand which details of the Lisbon triptych Falkenburg was writing about in his text.