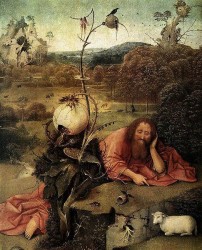 Fraenger sees the John the Baptist in the Wilderness panel (Madrid, Lazaro-Galdiano) as a painting that was used for meditation by the sect of the Free Spirit (see also Fraenger 1947). He explains every detail on the panel (the lamb, the weird plant, the structures in the background…) by referring to esoteric ideas of the Adamite sect.

Fraenger’s interpretation continuously suffers from Hineininterpretierung and he also commits a number of observational errors. He sees things which are not there, such as a ‘Star of David’ above the weird plant, and he offers wrong descriptions of certain details (for example: the legs of the little monster on the rock – according to Fraenger the creature has three bleeding wounds). Other errors and improbabilities in Fraenger’s argumentation are signalled in Bax 1956: 149-151.