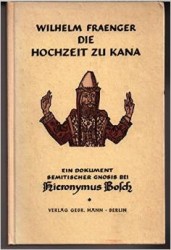 In this book Fraenger gathers far-reaching biographical details about the Supreme Master of the sect of the Free Spirit – in his opinion Bosch’s patron (see Fraenger 1947 and Fraenger 1948) – from a number of Bosch paintings.

From the tondos on the backside of the so-called Flood panels (Rotterdam) he concludes that in his youth the Supreme Master was entangled in a demonic environment: he frequented a Jewish-heretical sect (the ideas of which could be traced back to Egyptian or Syrian cults) and he married a girl from this sect. This marriage is represented on the Wedding at Cana panel (Rotterdam) and as the panel was only painted later (when the Supreme Master had already turned his back to the sect), the Jews in this painting are put in an unfavourable light. According to Fraenger the On-lookers and Pharisees at a Carrying of the Cross drawing (New York) represents a detail of the painting A Dispute between Monks and Heretics, mentioned by Van Mander in his Schilder-boeck. The drawing is said to represent the left part of the painting, the pharisees are members of the Jewish-heretical sect and one of them is the Supreme Master who has repented and wants to leave the sect behind.

The Conjuror (St. Germain-en-Laye), The Cutting of the Stone (Madrid) and the Amsterdam version of The Cutting of the Stone supply Fraenger with the reason why the Supreme Master turned away from the Jewish sect: in the sect he would have been forced to undergo a ritual castration. From one of the versions of Jesus among the Scribes he concludes that the Supreme Master’s surname must have been ‘Vos’ (the butterfly at the bottom of the painting being a Grossen Fuchs – ‘grote vos’ in Dutch, literally ‘great fox’ in English). After this Fraenger returns to the Rotterdam Flood panels.

On the so-called Hell wing the biblical Nephilim are represented, but with these Bosch actually meant the members of the Jewish sect. The dead mother with child on the Flood wing (called the Ararat wing by Fraenger) are the Supreme Master’s wife and child. They were killed during a violent encounter with the Jewish sect (depicted in one of the tondos on the backside). Their burial mound can be seen in the fourth tondo (the one with Jesus and two castaways). The ‘dragon-castle’ on the Rotterdam St. Christopher panel is actually the house where the Supreme Master came into contact with the Jewish sect and the Cologne Adoration of the Child is the last painting (a kind of epitaph) the Supreme Master ordered from Bosch: the Holy Family is the Supreme Master’s family (but the wife and the child had long been deceased when the painting was ordered and executed). Besides all this a number of other Bosch and Bruegel drawings are also being discussed (The field has eyes, The witch of Mallegem, St. James and Hermogenes).

This book clearly shows that Fraenger was well-read when it came down to gnostic and heretical ideas from Antiquity and the Middle Ages. But as Dirk Bax wrote in his Criticism on Fraenger: ‘Obviously it is getting crazier all the time’. To offer a detailed comment on all Fraenger’s erroneous obervations and far-fetched interpretations is such a discouraging (and in fact also rather useless) task that it is better to refer to Bax’ criticism in Bax 1956: 151-173. Bax wrote this criticism at a time when Fraenger’s theories were still taken seriously by many people, causing an urgent need for some sound riposte.