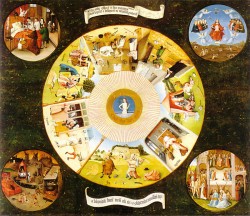 Fraenger claims that Bosch’s so-called Tabletop of the Seven Deadly Sins (Madrid, Prado) is a ‘tabletop of penance and reconciliation’. Because such a devotional object was unknown in churches the painting must have been intended for a sect that was familiar with Christian doctrine. According to Fraenger the patron was the Christian Jew Jacob van Aelmangien, who had the panel painted some twenty years before his temporary conversion to Christianity (in 1496). The panel is an early work by Bosch and so here we have to look for the original version of Jacob’s Jewish-Christian convictions.

What were these convictions? We quote Fraenger: ‘The Jewish-Christian syncretism of Jacob van Aelmangien, strongly influenced by gnosticism, in which the Ebionite dogma of the “verus propheta per saeculum currens” was mixed with Philonic/New-Pythagorean numerology and Orphean mysticism, to which probably an element of Syro-Coptic gnosticism was added…’ Referring to the Biblical words of Moses and Salomon, Fraenger gives the Tabletop an new name: the Table of Wisdom. It is supposed to be a devotional object of the sect: together with his disciples Van Aelmangien enjoyed supper at this table, whereas to the left and to the right (on the dark-green open spots) a ritual chalice was standing.

According to Fraenger the two major deadly sins are Ira (lower centre) and Gula (upper centre). In the Hell tondo Superbia is the major sin. Spectators should walk around the table anticlockwise. Fraenger also points out the poor quality of the four tondos in the corners. They were painted by Bosch before he met his patron. After he had come in touch with Van Aelmangien, Bosch’s artistic skills began to flourish and then he painted the rest of the panel.

Fraenger explains the central 128 rays of the Eye of God by means of Jewish-Alexandrine numerology. Finally, it should be pointed out that according to Fraenger this Table of Wisdom was not painted for the sect of the Adamites because in the Heaven tondo the male saints are separated from the female saints. So, apart from the Adamites and the Jewish sect related to the Rotterdam Wedding at Cana there is a third, Jewish-Christian sect at stake, to which Van Aelmangien belonged at the beginning of his ‘career’.