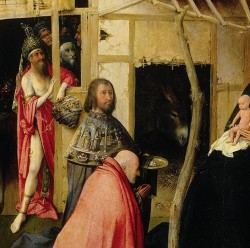 In this article Fraenger tries to found out whether the Prado Epiphany triptych is ecclesiastical or heretical art. At first sight everything in this triptych seems to be in accordance with traditional Christian doctrine. Apparently, neither the exterior nor the interior panels have any esotoric elements.

But the so-called ‘fourth king’ who is standing near the entrance of the stable in the central panel is proof of the opposite. By referring to a number of Jewish and apocryphal texts Fraenger reaches the conclusion that this figure is Adam, the crown witness of the Epiphany miracle to whom God had already revealed his Messianic plans at the beginning of creation. The man to ‘Adam’s’ left is Abraham who joyfully laughs at the birth of the divine child. Behind ‘Adam’ we see the ‘Lord of the Night’, a symbol of apostate Israel that cannot yet believe that the Messiah has come.

This syncretism of Christian and Jewish traditions points out that the triptych was intended as a devotional object for the sect of the Homines Intelligentiae that held its meetings in the house of the donors (who are represented in the interior wings).

The ‘frog’ in the left interior panel and the attacking wolves in the right interior panel allude to a Jewish-heretical sect to which Jacob van Aelmangiën belonged for a while (as did the donors), before becoming a member of the Adamites.