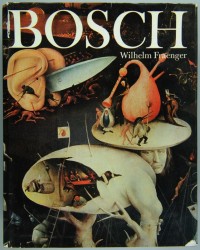 In 1975 a book with Fraenger’s collected texts about Bosch (published and unpublished ones) was posthumously released (Fraenger deceased in 1964). In the preface (partially borrowed from an article Fraenger published in 1943) he introduces his main thesis: in spite of the fact that Bosch was Philip II’s favourite painter, he was a heretic. Because Philip bought and admired Bosch’s panels, scientists have always suppressed the heretical character of Bosch’s work, although the painter was already suspected of unorthodox religious ideas at the end of the sixteenth century. Fraenger’s ‘method’ is based on the observation that until now Bosch researchers have only come up with arbitrary and incomplete interpretations: we can learn a lot more about Bosch if we study his paintings in a more meticulous way and if we see them as historical evidence and documents of the soul.

The books and articles Fraenger published, are discussed elsewhere by us (see Fraenger 1947, 1948, 1950, 1951, 1957 and 1963). What follows is a survey of texts from Fraenger’s estate which were published in this posthumous edition for the first time. It should be pointed out, though, that most of these texts are nothing more than preparatory notes, which explains their fragmentary and incomplete character.

In Vom Tisch der Weisheit zum Tausendjährigen Reich (a typoscript found in Fraenger’s estate) the author compares the Death tondo of the Seven Deadly Sins panel (Madrid, Prado) with the Death of the Miser panel (Washington, National Gallery) and concludes that within a short period of time Bosch has undergone a process of increasing understanding and spiritualization. This was the result of his getting acquainted with Jacob van Aelmangiën (Jacob of Germany), the leader of the heretical Adamite sect who strongly influenced Bosch. The panel in Washington is not the wing of an altarpiece (as had been supposed earlier) but a Lehrtafel für den Meditationsgebrauch (didactic panel for the practice of meditation), painted according to a theological design of Jacob van Aelmangiën.

In Die Versuchungen des heiligen Antonius (Nationalmuseum Lissabon) Fraenger suggests that the sources Bosch and his spiritual leader Van Aelmangiën used for this triptych, were mainly the Old Testament (the Song of Mozes) and the Apocalypse of St. John. Fraenger links most details of the triptych to texts from the Bible, and this leads to the conclusion that Anthony’s temptations are centering around sexuality, idolatry, magic and sodomy. Fraenger calls Bax’ interpretation narrow-minded and short-sighted, although he admits that the Dutchman has made ‘manche zutreffende Beobachtungen’ (many relevant observations). Two other things strike the reader in Fraenger’s elaborate analysis. From the fact that Bosch depicted a mandragora twice, he concludes that the painter was probably using drugs [p. 390]. Some details on the left inner wing and on the closed wings are said to offer more information about an assault by the Jewish-heretical sect introduced by Fraenger in his analysis of the Rotterdam Wedding at Cana, on Jacob van Aelmangiën’s wife and child. Fraenger is now even capable of ascertaining the date of the assault: it happened on a February, 17!

In an appendix some of Fraenger’s more fragmentary notes are published. One of the men on horseback on the central panel of the Haywain is identified as Jacob van Aelmangiën: this panel should be seen as a kind of self-accusation by Van Aelmangiën, referring to the short period in which he was converted to Christianity (see his baptism in 1496). A comparison of The Conjuror (St. Germain-en-Laye) with a sketch in the Louvre is again proof of Bosch’s radical evolution under the influence of Van Aelmangiën. Fraenger also writes a number of things about Bruegel’s Luxuria drawing, about the paradisiacal plants in Bosch’s oeuvre, about the Rotterdam St. Christopher, about the St. Julia and Hermits triptychs (both in Venice) and finally about a number of (supposed) Bosch and Van Aelmangiën portraits.

In the epilogue added to these collected texts Patrick Reuterwärd expresses his admiration for Fraenger. He admits that Fraenger has made errors and that his hypotheses are sometimes far-fetched, but so far nobody has been able to contradict Fraenger’s main ideas. Nevertheless there will still be negative reactions in the future, especially ‘in der Nachfolge des Antipoden Fraengers, Dirk Bax’ (in the wake of Fraenger’s antipode, Dirk Bax). Reuterswärd hopes that thanks to the publication of Fraenger’s texts about Bosch, his writings will be judged in a more correct way than has been the case up to now.