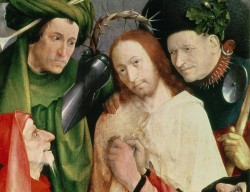 For a number of reasons Gerlach doubts that Bosch is the painter of the London Crowning with Thorns. Christ’s tormentors don’t show the aggressiveness we know from other Bosch paintings. A crescent moon with a star (see the headdress of the man at the bottom-left) often appears as a signature in the works of German painters in Bosch’s times. The painting has been adapted in several places, which doesn’t agree with Van Mander’s observation that Bosch worked in a fluent and swift way. The painting is so different from other (definitely authentic) Bosch works that Gerlach finds it hard to attribute it to Bosch.

The London Crowning with Thorns does show some similarities with the Cologne Adoration of the Christ Child (Wallraf Richartz Museum) but for Gerlach this latter panel is not authentic either. Gerlach is convinced that we have to assume a new, further unknown master from Bosch’s environment that he gives the temporary name of ‘Master of the Insect’. This master did not paint the London Crowning with Thorns, though, but he did paint the Madrid Cutting of the Stone, the California Conjuror, the Valenciennes St. James and the Magician, the Philadelphia Ecce Homo and two small Last Judgment panels (New York).