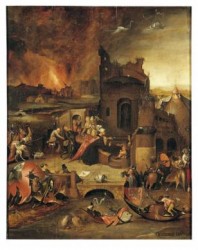 The copy of the central panel of Bosch’s Temptations of St. Anthony triptych (Lisbon) that is preserved in the Royal Museum of Fine Arts in Antwerp was probably purchased from the Bowier Collection in ’s-Hertogenbosch by Knight Florent van Ertborn in the beginning of the nineteenth century.

Apart from the Antwerp panel we know 8 other similar copies. Gerlach does not believe that the Antwerp panel has to be attributed to Peter Huys. Was it painted by the Bosch apprentice who is mentioned by Guevara? The style of the painting suggests that it was painted after 1550.

Gerlach also signals some paintings that are sometimes attributed to Bosch and that have an insect functioning as a signature. For the time being he wishes to attribute these works to a ‘Master of the Insect’.