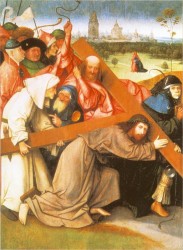 In many ways Bosch’s paintings reflect the pessimism that pervaded Northern Europe in the late Middle Ages. But his work also has a positive side that was often misunderstood or even totally ignored: in a number of Passion scenes from his middle and late period Bosch offered the spectator of his paintings an alternative for the path of sin and the toils of the World, the Flesh and the Devil.

The Christ figure in the Escorial Carrying of the Cross doesn’t seem to suffer from any physical or mental temptations. The gaze which he directs towards us should not be interpreted as an accusation (addressed to the – sinful – spectator), but rather as an appeal to follow Him (after Matthew XVI: 24) and ‘to take up the cross’. In the late Middle Ages this ‘path of the Cross’ was generally understood as the patient enduring of evil and the commotions of this world with the same humble patience that Christ had displayed during His Passion.

Bosch further developed the Imitatio Christi concept in a number of Christ crowned with thorns paintings (London / Madrid / a version only known from copies) and in the Ghent Carrying of the Cross. In the Lisbon St. Anthony triptych Bosch did not want to depict some sort of Zoroastrian dualism between good and evil, as was suggested by Baldass, for this would mean that Bosch denied God’s omnipotence. Anthony, who is tempted by devils, is another example of the Imitatio Christi motif: Anthony clearly defeats evil (just like Christ who is present in the closed wings and very near to Anthony in the central panel) and this is bound to have given consolation and hope to the contemporary spectator in the turbulent age in which he was living and which was ruled by the devil.