Hieronymus Bosch and the Mirror of Man: The Authorship and Iconography of the Tabletop of the Seven Deadly Sins 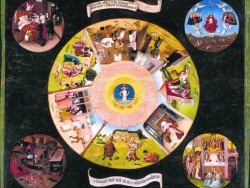 “Hieronymus Bosch and the Mirror of Man: The Autorship and Iconography of the Tabletop of the Seven Deadly Sins” (Walter S. Gibson) 1973

In this article Gibson reaches the conclusion that the Prado Tabletop was probably painted by Bosch in close collaboration with some of his assistants. Whatever may have been the exact role played by the master, he must have been responsible for the original design.

Gibson then relates the Tabletop to the medieval iconographic tradition. The circle in the center alludes to the well-known Wheels of Vices and Fortune, but its meaning was enriched by Bosch because with him the Wheel is at the same time the Eye of God reflecting the vices. In doing so he combined two other medieval, traditional concepts: God as the omnipresent witness of sinful humanity and God as a mirror that reflects His own creation. Gibson refers to a large number of iconographic and literary examples that may clarify Bosch’s painting.

Finally he points out that Bosch was not the only medieval artist who likes to present religious and moralizing themes in a systematically organized form (often based on a circle).