The Garden of Earthly Delights by Hieronymus Bosch: The Iconography of the Central Panel 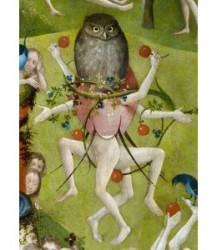 “The Garden of Earthly Delights by Hieronymus Bosch: The Iconography of the Central Panel” (Walter S. Gibson) 1973

Gibson agrees with Bax’s opinion that the central panel shows how the divine mission ‘be fruitful and multiply’ is misinterpreted by humanity. In this respect it is remarkable that Bosch did not paint a single child. In the right interior panel it is mainly the sin of luxury that is being punished. Other sins also play a role, but there is always a link with luxury.

In this way Bosch’s triptych belongs to the great medieval moralising tradition. But typical of the Renaissance is the preference for complex allegories that can only be understood by a sophisticated elite. In the sixteenth century the same preference can be found with the rederijkers (rhetoricians) and the producers of tapestries. That is why we should look for Bosch’s patrons among the nobility and the rich bourgeoisie. They supported the rederijkers and they possessed tapestries with complex allegorical themes.