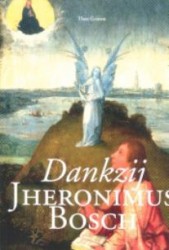 Dankzij Jheronimus Bosch [Thanks to Hieronymus Bosch], written by Theo Grimm (a Bosch enthusiast from ’s-Hertogenbosch) is, at first sight, a nice book with its easy to handle format and its numerous pleasant illustrations. On closer investigation however, this publication seems to suffer from mediocre editing, particularly concerning the use of capitals, interpunction and grammar. Capitals: why is the word ‘Schilderijen’ in the title on page 9 suddenly written with a capital S? At the bottom of page 176 ‘Schilderijen’ is even written with a capital S in the middle of a sentence. Examples of bad interpunction and grammar are legion but difficult to translate into English (compare the Dutch version of this review). On page 41 something has gone wrong with the layout of a heading. Nowhere in the book can a place or a year of publication be found.

The style in which the text is written has some flaws as well. The content, for instance, makes a naive impression. Continuously, the author refers to himself as ‘this student’ (talking about himself in the third person) and to his book as ‘this study’. When he is talking about a book by Garrido and Van Schoute on page 43, he suddenly writes: ‘Their book can be studied in the library of the Jheronimus Bosch Art Center’ (as if this were a very important argument). Regarding the central panel of the Garden of Delights it is said:  ‘In the distance people are painted small’ [p. 153]. A lot of sentences are simply badly written, but again examples are difficult to translate. Maybe one, regarding the Garden of Delights, I try to translate literally: ‘Has the painting come through as a warning of war ànd with hell? Yes!’ [p. 145]. Although the author seems to have some knowledge of Latin, he translates novissima (= the Last Things, namely Death, Last Judgment, Heaven and Hell) as ‘latest news’ [pp. 30/33] and even ‘endnews’ [p. 41]. On page 111 he suddenly translates novissima as ‘how they end’ and ‘what is still to come’.

A closer look at the actual content then. On the whole it can be said that the author often uses confusing arguments and sometimes even downright gibberish. A drastic example of this (again regarding the central panel of the Garden of Delights): ‘In between the rehabilitation of Adam and Eve and Hell there is no Garden of Delights! There Jheronimus painted His Garden of Imprudence: a lot of fruits, but with devils, the harnassed monsters leading the way’ [p. 155]. Rather arrogant is the use of titles that have been concocted by the author himself: the Prado Epiphany is suddenly called The Triptych of Christmas and Easter [p. 125] and the ‘correct title of the Garden’ [p. 147] is claimed to be The Garden of Imprudence [p. 159] (moreover: without any argument at all that could make this plausible). Although Grimm more than once refers to earlier authors (be it in a superficial and unstructured way), he often shows a lack of respect for the achievements of Bosch scholarship. When, to give only one example, he writes about the dovecote in the diabolized tree in the Rotterdam St Christopher panel (convincingly interpreted as a metaphorical brothel by Bax in 1948 already), the author briefly jots down: ‘A reference to carrier-pigeons?’

The uttering of claims to which there is no rhyme or reason is something that occurs far too often in this book. The representation of luxuria in the Hell tondo of the so-called Tabletop is interpreted by Grimm as follows: ‘The end of lust, you are being pulled from your deathbed (and cast into) a pool of dung’ (lechery in a deathbed!) [p. 41]. About the pedlar in the Rotterdam tondo he writes: ‘He looks like a homeless person from the Brabant, Guelderland or Holland side of the Meuse’ [p. 55]. About the armies of the the Three Magi in the central panel of the Prado Epiphany: ‘In the background three little armies are on manoeuvres’ [p. 72]. About St Anthony ‘and a lady’ in the central panel of the Lisbon St Anthony triptych: ‘They are praying for feverish and dying people’ (whereas obviously, this ‘lady’ is a she-devil) [p. 91]. About the Bruges Last Judgment triptych: ‘I totally agree with those Bosch scholars who attribute this signed work to Jheronimus himself because we see a Christian representation of the Last Judgment’ (as if all Last Judgments rendered in an orthodox way were painted by Bosch!) [p. 119]. About the resting Adam in the left interior panel of the Vienna Last Judgment triptych: ‘While Adam, tired from the long period of waiting in Limbo, has fallen asleep’ (waiting in Limbo, whereas Adam and Eve have only just been created!) [p. 127]. The merknights in the Garden’s central panel are stubbornly called ‘harnassed ones’ [p. 153], once even with a capital H [p. 158].

That iconography is not really Grimm’s forte is proven (i.a.) by his unduly positive interpretation of the lower left corner of the Haywain’s central panel: ‘Five adults (…) are taking care of children’ (whereas in fact these persons are deceptive gypsy-women and an equally deceptive beggar faking blindness) [p. 168]. It would be better to keep silent about the awful observational errors: a giant rat, for instance, becomes ‘half pig, half hare’ [p. 94] or a dog is considered a little monkey [p. 101]. In other passages it strikes the reader that very long descriptions of what can be seen in Bosch’s panels are given, whereas interesting details are completely ignored: for instance, that in the Venice Earthly Paradise panel a lion is devouring a prey, or that in the Haywain’s central panel a nun is receiving a sausage from a man playing the bagpipe (not a jester!) [p. 169].

Remarkable as well are the sporadical passages that can only be called ‘preaching’ [examples on pages 33 / 63 / 132] and in which Muslims [i.a. p. 23] and women [pp. 33 / 42] get unusually positive words of appreciation. These passages relate Bosch to our own times, suggesting time and again that basically Bosch’s subject matter focuses on the four virtues of Perseverance, Justice, Prudence and Modesty [pp. 78 / 81 / 105 / 127 / 139 / 176] and that these virtues are still supposed to be the cornerstone of a modern family. Grimm relates this subject matter to two elements from Bosch’s biography, which he apparently considers the foundation of his Bosch approach: Bosch’s education at the Latin school (resulting in a thorough knowledge of the Bible and a firm Christian faith) [see in particular pp. 112 / 177] and the support and approval he experienced from the other Sworn Members (often with a university education) of the Confraternity of Our Lady when producing his paintings [see in particular pp. 105 / 113 / 140].

It has to be admitted that these two biographical elements (Bosch as a pupil of the Latin school and Bosch as taking part in the culture of a well-educated urban elite) are definitely not wholly improbable (as a matter of fact, they rather sound like statements of the obvious). On the other hand, it has to be pointed out that Grimm does not come up with real evidence (neither for Bosch being a pupil of the Latin school in ‘s-Hertogenbosch, nor for the suggestion that Bosch’s fellow-brothers would have commented and evaluated the content of his paintings). Furthermore, the way in which Grimm uses these two hypotheses to explain Bosch’s paintings, is far from satisfying. Or does the fact that Bosch uses abbreviations in his panels with the help of stripes above the letters or that he uses Latin as such, mean that he must have attended Latin school [p. 13]? The Latin proverbs from the Proverbia Seriosa that Grimm sporadically relates to Bosch’s paintings are not really convincing either.

The ‘chronological’ structure Grimm uses to present Bosch’s paintings one by one is loosely and sloppily based on Peter Klein’s dendrochronological datings, resulting in uncertainties, improbablities and even absurdities. When Grimm uses this unreliable foundation in order to reconstruct a diachronical ‘very important internal evolution’ [p. 175] in Bosch’s oeuvre, this is obiously carrying things too far. Apart from the fact that Grimm does not succeed in making clear what this so-called ‘internal evolution’ might boil down to.

All this can only lead to one conclusion: Dankzij Jheronimus Bosch is a highly amateurish text that – with some good will – may be considered a Bosch rarity. For serious Bosch scholars, though, a book like this can only result in aggravation and a waste of time, and that is why it is appropriate to ask the question: was it absolutely necessary to publish a text like this? Showing no good will, it could be claimed: cyberspace on the Internet is virtually endless and in a blog everyone can air his opinions and thoughts, even if it doesn’t boil down to very much.