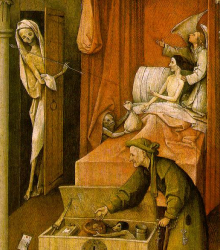 On pages 15-22 John Oliver Hand offers a state of affairs concerning the literature about Bosch’s Death of a miser panel in the National Gallery of Art (Washington). Bosch is described as a pessimistic moralist [p. 15] and more than probably his panel represents the death of a miser. The painting seems to be closely related to the contents and the illustrations of the late-medieval Ars moriendi texts [p. 17].

The paint layer on the panel is very thin and in many places the underdrawing can easily be revealed. Thanks to infrared reflectography we can see that originally the miser was holding a money purse in his right hand and a pokal (an embellished cup) in his left hand [p. 19]. Hand thinks it is understandable that some scholars see a relationship between this panel, the Ship of Fools (Louvre) and the Allegory of Gluttony (Yale University Art Gallery): the three panels may once have been parts of one and the same triptych [pp. 20-21].

The National Gallery of Art also possesses a nineteenth-century drawing, attributed to William Henry Brooke, which is a copy after Bosch’s Death of a miser. About Bosch possibly being left-handed, see p. 21 (note 21). A dendrochronological analysis has shown that the panel probably dates from around 1502 [p. 259: appendix I] and that the boards are from the same tree as those of the Rotterdam Wayfarer tondo.