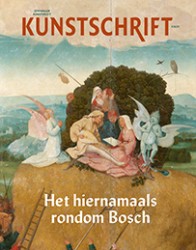 Haveman writes the introductory article to a special issue of Kunstschrift, dealing with Bosch and the Last Things (Death, Last Judgment, Hell and Heaven).

Some small imperfections in her text. She recognizes a metronome among the musical instruments in the lower part of the right interior panel of the Garden of Delights. Probably, she means the triangle of the she-devil inside the giant hurdy-gurdy. She writes: ‘According to Biblical doctrine the rich man has to fear the Hereafter, but with Rogier van der Weyden, Hans Memling and also Bosch it are mainly paupers and small losers who are being punished’. As far as Bosch is concerned, this statement is very debatable and it is definitely wrong regarding Van der Weyden and Memling. According to Haveman the little devil in the lower right corner of the St John on Patmos panel is trying to get hold of ‘the apostle’s words’. This makes no sense: the little monster is trying to get hold of St John’s inkwell (a well-known iconographic topos in the Late Middle Ages).