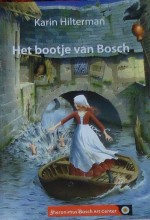 Het bootje van Bosch [Bosch’s little boat] is a juvenile book (for children of 12 years and older) by the Dutch author Karin Hilterman (°Santpoort, 1949). The protagonist is the twelve-year-old girl Joan whose (Dutch) parents once emigrated to New Zealand and who is now (it is Christmas time 1993) visiting her grandmother and grandfather (her dad’s parents) in ’s-Hertogenbosch, together with her father, mother and elder sister. Joan is fascinated by the carillon of the St. John’s Cathedral but because it is winter, no visitors are allowed in the tower. One day she sneaks inside unseen when the carilloneur is going to play his instrument. The backside of the book suggests that at this moment something impressive happens (what happens then…), but the only thing that happens is that the carilloneur spots her, gets angry for a moment and then begins to laugh. After that he accompanies Joan downstairs.

It is remarkable, though, that both Joan and her grandfather are paranormally gifted. Grandpa is able to cure people by laying his hands on them and he also knows some things by means of telepathy. Joan on the other hand regularly has lively memories about a girl called Janne who lived in ’s-Hertogenbosch in 1512 and who was a maid serving the household of Jheronimus Bosch. At the outset these memories are presented as daydreams, later they are called a ‘weird feeling’, a ‘dizziness’, a ‘click’, a ‘shiver’ but sometimes Joan has a ‘normal’ dream and in once instance she faints. After a while the reader has the impression that the switches to the past come about in an extremely easy way: on page 150 Joan wants to get back to the past and – there she goes, she is Janne in 1512 again.

The main thing occurring in those flashbacks to 1512 is that one day Bosch’s little rowing-boat is being hijacked by the local moron, a guy called Malle Botje [Silly Botje]. He throws Janne into the water of the Dieze but she is able to walk through the shallow water of the stream. When Malle Botje and the rowing-boat return Janne pretends to be a witch: under a bridge her screams are so agonizing that Malle Botje gets very scared, tumbles into the water and drowns. Realizing that a twelve-year-old kid is able to walk in this shallow water, one may find this hard to believe, but never mind. Important is also that one morning in 1993 Joan takes home a poor fellow who is addicted to alcohol, Fonske, intending to offer him food and clean clothes. Which she indeed manages to do (Fonske being an old acquaintance of Joan’s grandad).

And so the little pieces of Hilterman’s subject matter finally come together. On page 90 Joan has already been wondering whether it is possible to live more than one life so that God offers you the opportunity to make up for earlier mistakes. On page 165 she understands that her helping Fonske is an opportunity to make up for the death of Malle Botje, caused by her in a former life. And on page 185 Joan’s grandad explains that many people believe that God grants everybody more than one life in order to make up for mistakes in a former life. Sometimes people see things from a former life in some sort of dream, ‘as if it were necessary to remember certain things because you have to do something with them’. And grandpa concludes: ‘Now you are just Johan in the twentieth century again [sic: grandpa keeps calling Joan Johan] and you have made up for what you did wrong back then. It is as simple as that. It is a gift of God. Later today you should thank Him’ [p. 86].

At the same time and in the background a revealing part is being played by Bosch’s painting The Crowning with Thorns (London, National Gallery). Grandpa and grandma possess a life-size replica of this painting and Joan is very impressed by it. Twice in the book Joan’s grandparents offer a little sermon about the painting. The first time grandma points out that the suffering Christ wants to tell us that it is not important to have and to keep, but to care about each other [pp. 39-40]. The second time grandpa teaches Joan that Christ’s tormentors refer to the people in this world who also do nasty and mean things to each other [p. 133].

Reincarnation in ’s-Hertogenbosch, A.D. 1993, and a message that focuses on guilt, penance and universal love. Remarkable themes, to say the least (especially the idea of reincarnation, which is quite heretical from a Christian point of view!), and also somewhat naive and ‘simple’ (be it that nothing is wrong about being nice to each other), but then again the intended readers are twelve-year-olds. Apart from all this the text is written in a reasonably fluent style, although the story does contain quite a number of loose ends, the psychology remains rather superficial and after a while Joan’s repeated surprise about her flashbacks to the past (for pete’s sake, what was going on again?) inevitably sounds as irritating nagging.

Furthermore (but not only the author is to blame for this) the book’s layout sometimes makes a sloppy impression. Only the first chapter (there are fourteen of them) has got a title and at the beginning of some chapters a place and a date are given (’s-Hertogenbosch 1993 / 1512) but in most cases they aren’t. Why the text of every chapter’s last page (except in the case of the last chapter) is centred remains an unsolved riddle.

In this novel Bosch’s little rowing-boat plays a more important role than Bosch himself, so the title seems okay, although the Crowning with Thorns panel also has its function. It is nice that the author has included short references to Bosch’s neighbour Loy Beets and his travels to Jerusalem [p. 28] and to the architect Jan Heijns [p. 97] (both of them authentic acquaintances of Bosch, be it that the neighbour was not called Beets but Beys). That Bosch’s wife Aleyt is said to be quite some years older than her painting husband [p. 26] is based on outdated information [Vandenbroeck 1987], though, and on page 27 Bosch’s paintings are called ‘canvases’ whereas further on that same page they are correctly called ‘panels’.