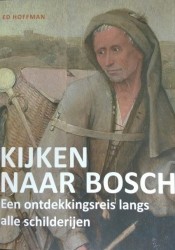 In this publication, aimed at a general reading public, all the paintings that are attributed to Bosch are discussed one by one. The author has chosen for a thematical approach, resulting in the fact that parts of the same triptych are sometimes found in different sections. The titles of these (four) sections are: From the creation of the world to the crucifixion of Christ, Nine saints, Common people on the road and The end of times.

To illustrate the author’s approach we take his analysis of the Ghent St. Hieronymus panel as an example [nr. 17]. The general outline of what can be seen on the paintings, is described in an orderly and concise way, with here and there some extra information. In the case of the Ghent panel it is signalled that the saint is depicted as a cardinal, that his attributes are a red hat, a red dress and a lion and that the presence of a Bible reminds the viewer of the fact that Hieronymus translated the Bible into Latin. Most of the time these iconographical descriptions are not complete, though. Here for instance nothing is said about the weird hollow tree that looks like the mouth of a ferocious wild animal. Furthermore iconographical interpretations are very rare: here the reader is left on his own which is a pity, especially in the case of details that are important for a better understanding of the painting as a whole. In the case of the Ghent St. Hieronymus for example we are made aware of the presence of a sleeping little fox and of a bird’s nest, but there is no mentioning of the facts that these details refer to a biblical topos (Mathhew 8: 20 / Luke 9: 58) and that this biblical topos plays a role in one of the most important letters of Hieronymus (the Letter to Eustochium). Yet, every now and then the author endeavours upon a careful hypothesis. Here for instance it is suggested that the panel could be commissioned by the ’s-Hertogenbosch Brothers of the Common Life, who were also called ‘Hieronymites’.

As a first introduction to the world of Bosch this book is definitely useful, also because of the nice illustrations. In the case of another edition or of a translation one thing in the bibliography at the end is bound to be adapted: the theme of the Second International Jheronimus Bosch Conference in 2007 was not Bosch’s patronage, but the sources of his work. The lack of page numbers is a slight disadvantage.