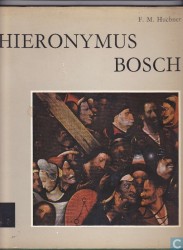 [This edition not mentioned in Gibson 1983]

Huebner offers a very general, psychologically-oriented introduction to Bosch with sporadic National Socialist echoes: due to the increasing influence of the ‘Latin-inspired’ Renaissance the Dutch people have lost their national pride, their ‘Germanic basic principles’ and their ‘Great-Dutch destination’. Furthermore, Bosch clearly belongs to the ‘imperial universality of the ideas and feelings of the Germanic world view’…

Based on the (supposed) Bosch-portrait in the Arras Codex and on some ‘probable’ self-portraits in the paintings, Huebner then presents a psychological approach of the painter. Bosch’s physical appearance belongs to the asthenic or leptosomic category, indicating that he had a schizothymic character. Schizothymic characters are liable to fall into the most contradictory extremes. Ecstatic joy poking fun at everything can suddenly turn into deep melancholy, which is very susceptible to supernatural or subconscious inspirations. This may explain the double nature of the art of Bosch: on the one hand he is the painter of realistic observations of his own environment and of the common people, on the other he is the inventor of phantasmagories.

As a realist Bosch likes to depict the small world of shopkeepers, mendicant friars and wayfarers, whose side he even chooses against the world of corrupt priests, cowardly knights and quacks, who are being criticized by means of jokes. In this way he is a precursor of the later genre painters and he shows close affinities to the moralizing satirists of his times.

Bosch found the sources for his fantasies in his own subconscious, in the image of his fellow-men (who too often look like the creatures of the underworld) and in the things around him that receive a certain kind of Unheimlichkeit through his observing eye. All the same, his devils also have a realistic trait: they cannot be explained by means of a psycho-analytical approach but are painted in an almost scientific, meticulous way in order to give them the appearance of really existing creatures.

To ask for the meaning of these fantastic creatures is redundant. Bosch wanted to present the world as he saw it: as the almighty world of the devils. According to Huebner, this should be considered Bosch’s second nature, or a particular quality of his way to look at things. The illiterate will probably understand his paintings the best: the hilarious and terrifying aspects will directly appeal to them.