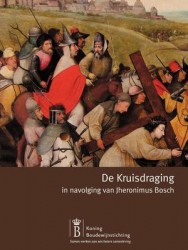 In 2009 the Jacobs van Merlen family donated a sixteenth-century panel to the Belgian King Baudouin Foundation after which it was entrusted on long-term loan to the Antwerp Mayer van den Bergh Museum in 2010. The painting is a Carrying of the Cross, until then attributed to Jan Mandijn. Together with at least three other similar paintings the panel belongs to a group influenced by Hieronymus Bosch’s Vienna Carrying of the Cross wing (the paintings in this group can be called ‘free copies’). Thanks to the King Baudouin Foundation a thorough scientific examination of the panel was made possible and this was entrusted (as part of the ’s-Hertogenbosch Bosch Resarch and Conservation Project) to Matthijs Ilsink and Jos Koldeweij.

The panel probably dates from the middle of the sixteenth century, perhaps from around 1540. The authors offer a detailed iconographic analysis of the painting, more than once based on the results of the technical research (infrared reflectography, X-rays). The Antwerp panel does not have a signature but it does show a monogram, attributed to Jan Mandijn by some authors in the past. Microscopic examination has revealed, though, that the craquelure does not run through the monogram, proving that this was added later. Therefore the authors see no reason to attribute the panel to Jan Mandijn, also because its style deviates from the Haarlem St. Anthony panel (Frans Hals Museum), which bears the signature ‘jan mandijn’. From now on it is considered as an anonymous Bosch imitation, once more attesting to the large influence exerted by the works of Bosch in the second and third quarter of the sixteenth century (especially in Antwerp).

This little book, fluently written with a lot of professional skill, is an indispensable guide for those who want to have a closer look at the Antwerp Carrying of the Cross. An interesting thing to learn from this text is the following: when the wings of a windmill are arrested in the shape of an X, this is a sign of high alert: it means that everybody has to show up as soon as possible in order to face up to some dangerous situation [p. 23]. Finally one marginal comment. In the right-hand upper corner three crosses have been painted: while two of them are still being erected, the middle one already carries a convict. Although the authors state the opposite [pp. 29/38], the large crowd assembled near the middle cross seems to point out that the crucified person is meant to be Christ. The fact that events taking place at different moments are represented within one panel, is not uncommon in late-medieval paintings.