The patron of Hieronymus Bosch's 'Last Judgment' triptych in Vienna 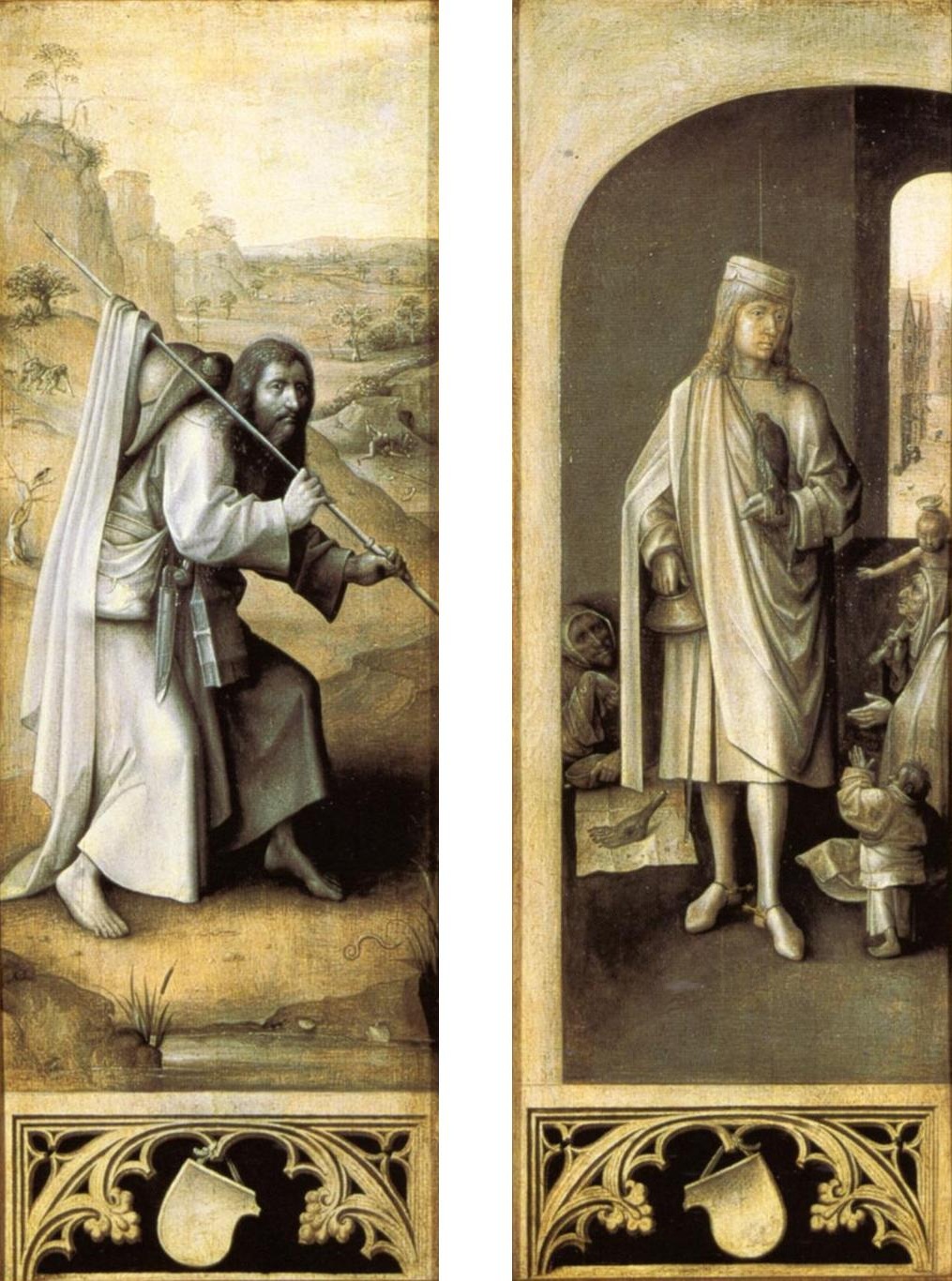 In 2017, members of the Bosch Research and Conservation Project and a team of the Antwerp University examined Bosch’s Vienna Last Judgment triptych, using three modern techniques: infra-red photography (IRP), infra-red reflectography (IRR), and Macro X-radiograph fluorescence (MA-XRF). This examination revealed that underneath the (empty) escutcheons in the lower exterior panels there are older escutcheons, executed in paint. The older escutcheon in the right exterior panel shows traces of gold and vermillion. These traces suggest a similarity to the coat of arms of Hippolyte de Berthoz that can be seen in the St Hippolytus triptych in the Bruges Holy Saviour’s Church (Sint-Salvator). About 1470, Dirk Bouts began to paint this triptych, it was completed by Hugo Van der Goes, and Aert van den Bossche painted some additions. A similar coat of arms can also be seen in a St Hippolytus triptych painted by an anonymous master (Boston, Museum of Fine Arts). Both triptychs were commissioned by Hippolyte de Berthoz, an important financial official at the Burgundian court. Earlier, Koldeweij had already argued that the saint in the Vienna right exterior panel is not St Bavo, but St Hippolytus, and that the commissioner of the Vienna triptych might be Hippolyte de Berthoz. This has now been confirmed by the recent technical examination.

Charles de Berthoz, Hippolyte’s son, had two new wings added to the triptych in the Bruges church between 1503 (when Hippolyte died) and 1508 (when Charles’s wife Margaret died). These wings represent Charlemagne (left) and St Margaret (right) and (lower) the coats of arms of Charles and his wife. The shape of the escutcheons shows a striking similarity to the shape of the (empty) escutcheons in the lower Vienna exterior panels. This may suggest that Charles had the escutcheons in the lower Vienna exterior panels altered after the death of his father. It is also possible that Charles de Berthoz was the original commissioner of the Vienna triptych, but why then does the right exterior panel represent St Hippolytus? That the left exterior panel represents St James the Greater, can probably be explained by the fact that the triptych was meant for the St James’s chapel in the Bruges Holy Saviour’s (Hippolyte de Berthoz lived in Bruges, and the Holy Saviour’s was his parish church).

A third possibility is that after Hippolyte’s death the Vienna triptych was acquired by a wealthy and powerful person. This could explain why in the 1520ies Lucas Cranach was able to produce a faithful copy of the Vienna triptych. But why did the escutcheons in the Vienna exterior panels remain empty, and where was the triptych between 1503 and 1659 (when it reappeared in an inventory of the collection of Archduke Leopold Wilhelm in Vienna)? For now, these questions have to remain unanswered.