A Stone Never Cut for: A New Interpretation of "The Cure of Folly" by Jheronimus Bosch 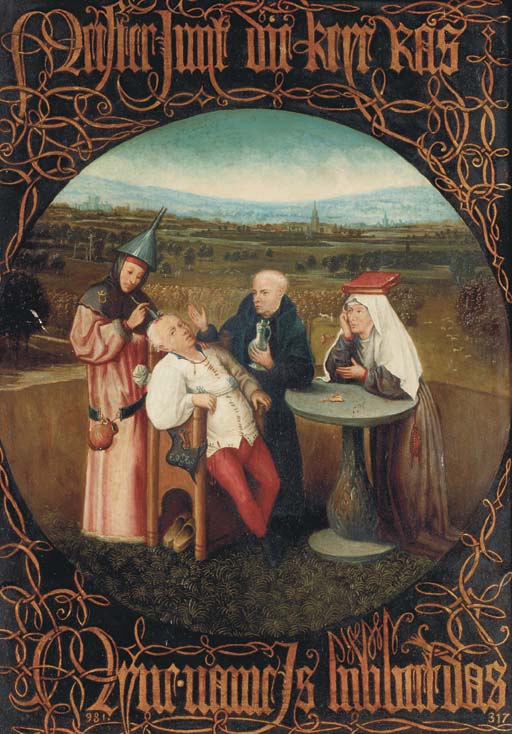 “A Stone Never Cut for: A New Interpretation of The Cure of Folly by Jheronimus Bosch” (Matthis Krischel, Friedrich Moll, and Philip Van Kerrebroeck) 2014

The three authors are urologists. They offer a new interpretation of The Cure of Folly (Madrid, Prado), a painting usually attributed to Jheronimus Bosch. Medical and art historians agree that it is unlikely that the picture illustrates an actual operation, as it has been demonstrated that there are no historical sources mentioning fraudulent – or genuine – operations on the head during the 15th and 16th centuries. In the existing accounts of quackery in the Netherlands during this period, cranial lithotomy is not mentioned, but there are accounts of it being presented in theatrical performances meant for entertainment and moral instruction.

The three figures surrounding the patient can be seen as allegories of medicine, religion and philosophy. All three of them carry attributes that signify the limits of their knowledge and power. The painting can be interpreted to point out the inability of medicine, philosophy and even religion to do much good for some patients, including those suffering from severe neurological or psychiatric conditions. The poor reputation of vesical lithotomy at the time of Bosch makes it plausible that he used the concept of ‘cutting for bladder stones’ as a symbol of the limits of medicine, but also of an abstract hope for successful psychosurgery to cure ‘madness’ in the future.