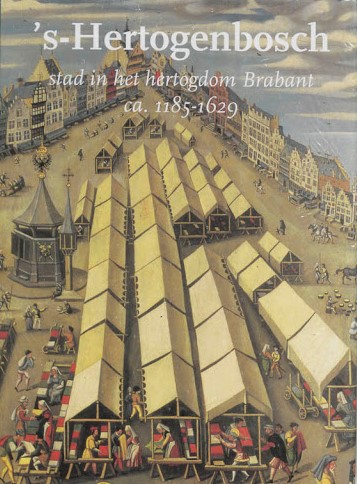 This standard work of reference about the history of ’s-Hertogenbosch until 1629 (the year in which the city fell to the Protestant troops of the Dutch Republic) spends only a few pages on Hieronymus Bosch. On the pages 228-230 Kuijer notes that apparently the interest of Bosch’s contemporary fellow-citizens in his work was rather meagre. He was a ‘sworn brother’ of the local Brotherhood of Our Lady. Through this Brotherhood he probably got in touch with some of his patrons (eminent Spaniards and important noblemen). More than likely, Bosch’s being a member of the Brotherhood’s inner circle is not explained by his being famous (circa 1488) but by his marriage to Aleid van de Meervenne, whose family belonged to the city’s higher circles. A similar case is represented by Jan Heyns, who may have become a sworn member of the Brotherhood because he was the highly-respected master builder of the St John’s Church.

Furthermore, Kuijer makes the plausible suggestion that the nocturnal scene with the burning village in the centre panel of the Lisbon St Anthony triptych [p. 109] and the background of the right inner panel of the Garden of Delights [p. 280] were inspired by the recurrent military violence during the war with the nearby Duchy of Guelders (Gelderland) in the period 1492-1528. On page 293, the author suggests that Bosch had various opportunities to watch fires and ransacked villages in the Meierij (the region situated northeasterly of ’s-Hertogenbosch) from the city walls. On page 280, the hellscape in the Garden of Delights reminds the author of the cruel way in which the Burgundian duke Charles the Bold punished the cities of Dinant and Liège in 1466 and 1468.